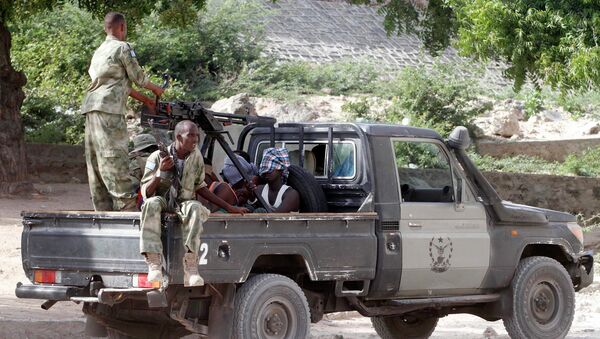 As the Pentagon weighs withdrawing thousands of US troops from Africa for deployment to other theaters, a leading US commander said the recent al-Shabaab attack on a US airfield in Kenya is proof US Africa Command (AFRICOM) is already short on resources.

In the latest tug of war over US troops, US AFRICOM commander Gen. Stephen Townsend has said the roughly 6,000 US troops and contractors in Africa need more support to carry the fight to Daesh and al-Qaeda affiliates. His comments come as Pentagon leaders consider the benefits of shifting thousands of US troops from Africa to other theaters in order to prepare for confrontation with Russia and China.

“We were not as prepared there at Manda Bay as we needed to be,” Townsend told the Senate Armed Services Committee on Thursday about the US airfield near the Kenyan border with Somalia. “Al-Shabab managed to penetrate onto that airfield. They were able to get access, kill three Americans and destroy six aircraft. We are digging into that to find out why that is the case.”

Al-Shabaab, a Somali fundamentalist militant group affiliated with al-Qaeda, staged a pre-dawn attack on the Manda Bay air base and Camp Simba on January 5. The militiamen bombarded the base with mortars before penetrating the perimeter. According to AFRICOM, US and Kenyan troops did not immediately respond to the attack, and US commanders claimed Kenyan soldiers hid in the grass during the fighting - claims Nairobi has strongly rebuffed.

“Al-Shabaab has shown their reach and the danger that they pose,” Townsend said. “I think we need to take that serious. I am looking with a clear eye at every location in Africa now.”

Roughly two-thirds of all US troops in Africa are at the massive US base in Djibouti on the Horn of Africa, with the rest scattered at locations across the Sahel and East Africa. A few years ago, many US lawmakers were surprised to learn there were any US forces in Africa, when news broke in October 2017 that four soldiers had been killed in western Niger in an ambush by Daesh forces.

Militants allied to the Syrian-based jihadist group calling themselves the Islamic State in the Greater Sahara (ISGS) have grown strong in the political anarchy created by the collapse of the Libyan government, especially in the far reaches of the massive desert, where they move readily across the borders of Libya, Algeria, Niger and Mali.

France, a former colonial power that retains ties to many countries in the region, has recently reinforced its roughly 4,500 troops in West Africa, vowing to carry the fight to ISGS whether or not the Americans join them.

"If the Americans were to decide to leave Africa, it would be really bad news for us,” French President Emmanuel Macron said earlier this month. “I hope to be able to convince President Trump that the fight against terrorism also plays out in this region.”

Townsend told lawmakers on Thursday that despite the Pentagon’s needs elsewhere, al-Shabaab and ISGS remained an “inconvenient reality” US commanders could not ignore.

"While we should not try to confront each one, we should remain resolute in confronting those who threaten Americans and the American homeland, like al-Shabab - the largest, most violent of al-Qaeda's branches," the AFRICOM commander said. "Today, Africa does that with a light and relatively low-cost footprint by supporting African and international partners who are leading these efforts."

Pentagon leaders like US Defense Secretary Mark Esper and Chairman of the Joint Chiefs of Staff Mark Milley have noted the Defense Department is considering shifting as many as 200,000 US troops around the world into the Indo-Pacific theater in order to “support competition” with Russia and China. Their logic follows the shift in priorities laid out by the December 2017 National Security Strategy, which noted that “inter-state strategic competition, not terrorism, is now the primary concern in US national security.”

However, Townsend maintained that Africa is a legitimate and valuable arena of competition with Russia and China, saying that “Africa offers America a competitive edge” that Washington “should take advantage of.”

"What AFRICOM accomplishes with a few people and a few dollars on a continent three and a half times the size of the continental United States is a bargain for the American taxpayer and low-cost insurance for America in that region," Townsend said. "A secure and stable Africa remains an enduring American interest. US AFRICOM stands ready to protect and advance American interests and respond to crises in Africa."

However, the Pentagon has also stepped up training local African forces to do the jobs of US troops via the 127 Echo program, a $100 million budget to train “surrogate forces” able to “take ownership of the problem,” as Army Maj. Gen. James Hecker put it.

The Chinese military presence in Africa is tiny, confined to a People’s Liberation Army support base in Djibouti, just a stone’s throw from the US base. Instead, China’s relationship with African nations has been almost purely economic: partnerships via the Belt and Road Initiative have seen infrastructure projects ranging from hydroelectric dams in Equatorial Guinea and Cote d’Ivoire to railroads within Kenya and between Ethiopia and Djibouti. China has also partnered with Russia on a nuclear power plant in the Ethiopian capital of Addis Ababa.

Trade between China and African countries has declined in recent years, shrinking from a 2014 high of $215 billion to $148 billion in 2017, according to data from the International Monetary Fund. However, in 2000 that trade stood at just $10 billion. By comparison, US trade with Africa in 2017 was just $39 billion, according to US Agency for International Development data.

Earlier this week, US Secretary of State Mike Pompeo characterized China’s ruling Communist Party as the “central threat of our times” during a news conference with British Foreign Secretary Dominic Raab.