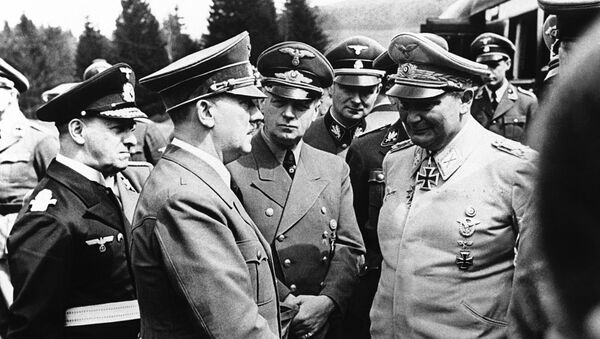 This week marks the 75th anniversary of the sinking of the Wilhelm Gustloff, which still sits at the bottom of the Baltic Sea. The huge ship was sunk by a Soviet submarine as it carried thousands of refugees from the Eastern Front.

In January 1945 the Second World War - known as the Great Patriotic War in Russia - was entering its final act with Nazi Germany embracing "total war" as its armed forces struggles to fend off the Red Army in the east and the British and US forces in the west.

The Baltic port of Gotenhafen (now Gdynia in Poland) had been encircled by the Red Army during the Vistula-Oder offensive.

It was that same offensive which liberated the Auschwitz concentration camp, as well as the Polish capital Warsaw and the historic city of Krakow.

This week marks the 75th anniversary of the sinking of the Wilhelm Gustloff - believed to be the largest loss of life in any shipwreck in history (more than 9,000 people). pic.twitter.com/PdpR80nkxf

On 30 January 1945, just after 9pm, the commander of a Soviet submarine let loose four torpedoes as he tracked a huge ship which was travelling west, away from the Eastern Front and back towards Germany.

Three of the torpedoes struck the ship, the Wilhelm Gustloff, on the port side, causing devastating damage which sent it down within 40 minutes.

​There were up to 10,000 people on board, including 5,000 children and around 1,000 Kriegsmarine (Germany Navy) personnel, and all but 500 of them perished in the icy waters of the Baltic.

The atrocities committed at Auschwitz and the vast numbers who died in the Second World War - more than eight million people in the Soviet Union alone - meant there was little sympathy in Britain, France or the United States for the victims of the Wilhelm Gustloff or the General von Steuben, another passenger ship which was sunk by S-13 two weeks later with the loss of almost 4,000 lives.

One of the children on board was Jurgen Danöhl, who recalled years later the joy at boarding the ship after weeks of hunger and trekking through the snow as the Wehrmacht retreated in the face of the Red Army’s onslaught.

The Wilhelm Gustloff strung with lights in Hamburg Harbor. pic.twitter.com/aSO7VPofIi

​Danöhl told the German broadcaster ZDF years later: "Mother said ‘children, we made it.’ No trudging through the snow. No frost. No more wet gloves. No wet feet. It was music to our ears. It was hope."

Fjodor Danilov, one of the crew of the S-13, told ZDF: "Our goal was the same as always - destroy the enemy. We were supposed to seek and destroy transport ships. That was our mission."

Ship Was Named After a Nazi 'Martyr'

The Wilhelm Gustloff was the largest loss of life in maritime history but although thousands of civilians were killed it was not a breach of international law because the ship had been commandeered by the Kriegsmarine and was carrying military personnel and equipment.

The ship was built as a passenger liner in 1937 for Kraft Durch Freude (Strength Through Joy), the Nazi regime’s leisure organisation.

It was originally to be called the Adolf Hitler but the Fuhrer himself changed the name after sitting next to the widow of Gustloff, a Nazi leader in Switzerland who had been assassinated by a Jewish student in 1936.

Gustloff was named a "blutzeuge" (martyr to the Nazi cause) and also had an SS squadron named after him.

When the war broke out the Wilhelm Gustloff was taken over by the Kriegsmarine and converted into a hospital ship.

Tragic though the loss of so many children’s lives was, it was arguably a direct result of Adolf Hitler’s refusal to accept his armed forces were facing defeat.

In February 1943 - a few days after a German field marshal surrendered for the first time, at Stalingrad, Joseph Goebbels made a famous speech in which he declared “total war” against the Soviet Union, Britain and the US.

Kaliningrad mem to Cpn Alexander Marinesko who's C13 Sub sunk the Wilhelm Gustloff with the loss of 9k lives 30/1/45. pic.twitter.com/EHVih3kQxq

​To Goebbels “total war” meant offering no mercy to civilians and also expecting German civilians to sacrifice everything for the war effort, including their lives.

So the loss of about 12,000 civilian lives on the Wilhelm Gustloff and the General von Steuben was an inevitable consequence of the continuation of the “total war” long after Germany had any chance of victory.

Wreck images of the Wilhelm Gustloff by Bradley Sheard. If I won any of the recent lottery drawings, I would've loved to put together an expedition to map the wreck in HD as they had done with the Titanic, open a museum and add more artifacts from the wreck. pic.twitter.com/BLVceKZYsK

​In 2011 the Polish government imposed an exclusion zone around the wreck, which is around 30 miles offshore, north of the town of Łeba.

The exclusion zone was designed to protect the wreck - which is essentially a mass graveyard - from divers hunting for treasure or war trophies.

Is the Amber Room at the Bottom of the Baltic?

Among the treasure that divers were looking for were the remains of the legendary Amber Room, which was pilfered from a palace outside Leningrad in 1941 and taken to the city of Konigsberg (now Kaliningrad) in what was then East Prussia.

One theory is that sections of the Amber Room were placed in the hold of the Wilhelm Gustloff by Erich Koch, a Nazi Gauleiter or regional leader, when East Prussia was evacuated in January 1945.

Koch died in a Polish prison in 1986, but never gave up the secret of the Amber Room, which would be worth around £500 million today.

The commander of the S-13, Alexander Marinesko, was the Odessa-born son of an ethnic Romanian sailor but was demoted in October 1945 because of his heavy drinking and died in obscurity in 1963, aged 50.

But his reputation was rehabilitated by Mikhail Gorbachev in 1990 and he was posthumously awarded a Hero of the Soviet Union medal.

He is buried in Bogoslovskoye cemetery in his native St Petersburg.