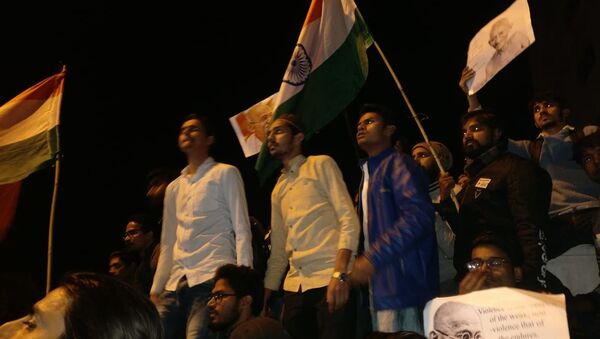 © Sputnik
Subscribe
New Delhi (Sputnik): Protests against the new legislation are continuing across the country despite Prime Minister Narendra Modi claiming that no Indian will lose their citizenship as a result of the law change.

Three senior journalists along with politicians were detained by police in New Delhi on Thursday during an anti-Citizenship Amendment Act (CAA) rally. The journalists: Shivesh Garg, Rajesh Kumar and Pathiv were detained when they were present at a protest site near the Delhi Gate.

One of the journalists, Shivesh Garg, said that they were standing near the traffic signal at Delhi Gate when police detained them. “We showed them our Press Identity Cards and told them that we were journalists. But they did not listen to us and detained us.”

He said they were detained for just a short time and later released. Reportedly, policemen also arrested some women despite female officers usually being required to do this.

Initially, a scuffle broke out between police and protestors when they tried to cross the barricades. Since most of the protestors were students, teachers intervened and asked the students to move back.

Earlier, in the day time, a gun-wielding man, identified as Rambhakt Gopal, fired at anti-CAA protestors and left one person injured.

Before the incident, the accused went on Facebook to publicly identify himself saying: “All brothers are requested to see me first.” He later went live and showed the students gathered outside Jamia Millia Islamia public university.

"Gopal will be booked section under 307 (attempt to murder) of the Indian Penal Code and relevant sections of the Arms Act. We are checking if he is a juvenile or not," said Devesh Srivastva, a senior police official.

Since December 2019, India has witnessed countrywide protests against the CAA, often involving violence.

The law grants Indian citizenship to persecuted Hindus, Sikhs, Buddhists, Parsis, Jains, and Christian immigrants from Afghanistan, Bangladesh, and Pakistan, who arrived in India before 2015. But critics of the law find it unconstitutional, as it gives citizenship on the basis of religion and discriminates against Muslim immigrants.