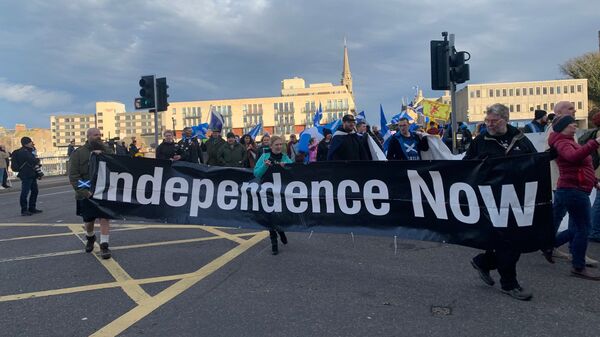 First Minister Nicola Sturgeon has issued a letter of request to UK Prime Minister Boris Johnson to hold a second Scottish independence referendum at the beginning of January. While the first vote in 2014 was a victory for unionism, independence sentiment has risen following the UK's decision to leave the EU in 2016.

A new YouGov poll on Thursday has revealed that a small majority of Scots now support independence, a day before the United Kingdom is poised to formally withdraw from the EU.

The poll, which surveyed 1039 people over the age of 16, discovered that 43% were in favour of Scottish independence compared to 42% opposed, with 15% saying that don't know.

A new YouGov survey on Scottish independence has Yes in the lead for the first time since 2015, by 51% to 49%. @chriscurtis94 takes a look at how the electoral landscape has changed since 2014 and how #indyref2 might play out https://t.co/CAPgSqD1l0 pic.twitter.com/jdeoGi81j2

​It also revealed that 1 in 5 (21%) of people who voted Remain in 2016 but No in the independence referendum have now made the move over to Yes, indicating a prioritisation of Scottish EU membership above the UK.

A serious variable which could impact a potential second vote is that the majority of those who did not vote in the previous referendums currently back Yes by 51% to 25%.

However, the poll also found that most Scots do not back another vote on independence in 2020 or 2021.

56% oppose holding an indyref2 this year, with just 34% supporting it as well as rejecting one for 2021, even if the Scottish National Party (SNP) win a majority.

When asked if they would back a referendum within the next 5 years however, them majority backed it by 44% compared to 38% opposing it.

Nicola Sturgeon wants a new independence referendum this year, but Scots oppose by 56% to 34%. They do, however, support one within the next 5 years by 44% to 39% https://t.co/CAPgSqD1l0 pic.twitter.com/JSK2b8tfqi

Of those polled, the majority believed that the shakeup from an independence vote would be bad for the economy with 42% thinking Scotland will worse off and 34% thinking it would improve.

The poll is similar a survey conducted by Lord Ashcroft Polls in August 2019, which also showed a majority support for independence ahead of the Brexit deadline.

Scotland overwhelmingly voted to remain in the European Union with 62%, many of whom voted to stay in the United Kingdom 2 years before that.

The indyref2 campaign, energised by the sweeping success of the Scottish National Party in 2019, has based much of its support on the proposal that Scotland is being pulled out of the European Union against its wishes.

First Minister Nicola Sturgeon formally made a request to Prime Minister Boris Johnson this month for the right to hold a second independence vote, a demand which was rejected.