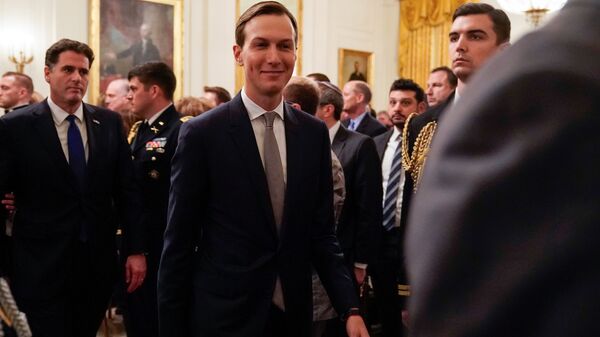 Presidential adviser Jared Kushner was one of the architects of Donald Trump’s newly-unveiled proposal for the resolution of the Israeli-Palestinian conflict, which was hailed by Israel and preemptively rejected by Palestinians.

Jared Kushner has defended his Middle East peace plan, saying he has achieved clarity on the issue because he’s read 25 books about it.

“I’ve been studying this now for three years,” Kushner said of the conflict in an interview with Sky News Arabia on Wednesday.

Kushner immediately had people questioning online whether this could count as credible evidence of his ability to end one of the most contentious issues in modern history. Some think not.

Got it. So, if I read 25 books on the life of a astronaut I can finally fulfill my childhood dream of being an astronaut. https://t.co/ccmKLf8FCa

Reading 25 books on the Israel-Palestine conflict and becoming an expert on peace in the Middle East is about as likely as reading the Harry Potter series and becoming a wizard. https://t.co/vGHhfdq7Ii

I have read more than 25 books on Israel/Palestine and wouldn’t even write an op-ed on the topic let alone a whole plan.

I call Bullsh*t. Kushner hasn't read 25 books on any subject. The mere act of him making such a claim tells us that Kushner feels he's unqualified to be in his position. It's akin to a 16-year old who wants the car on Friday night — reciting all of his chores to his mother. https://t.co/8xN2od2EdK

Are people surprised that all of Kushner’s foreign policy experience from reading 25 books didn’t get a Middle East peace deal?

Kushner, a top White House adviser under his father-in-law, Donald Trump, has been tasked with setting out a viable plan to resolve one of the most contentious issues in modern history despite having no notable expertise in foreign affairs, let alone the Middle East.

He appears to have developed a close relationship with Israeli Prime Minister Benjamin Netanyahu and Saudi Crown Prince Mohammed bin Salman, two major US allies in the Middle East, but has struggled to cosy up to Palestinians.

His peace plan, unveiled on Monday, proposes that Israel annex all its settlements in the occupied West Bank while freezing further settlement activity there for at least four years, in exchange for giving Palestinians limited autonomy, with Israeli security control, and $50 billion in investment incentives.

Palestinians have angrily dismissed the proposals, as they’ve been largely expected, and Kushner was scathing in his criticism:

“If they don’t [accept the deal], they’re going to screw up another opportunity, like they’ve screwed up every other opportunity that they've ever had in their existence.”

“It’s a big opportunity for the Palestinians,” he added. “They have a perfect track record of blowing every opportunity they’ve had in their past.”