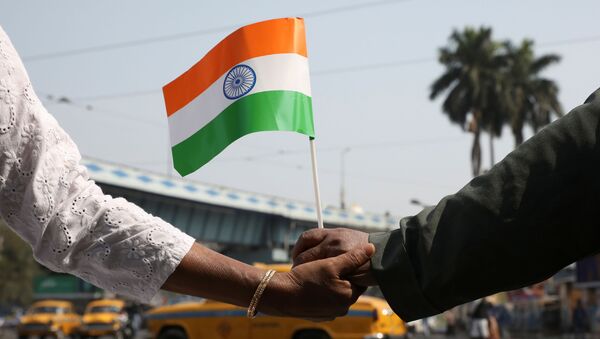 New Delhi (Sputnik): Indian clothing giant Pantaloons has been accused of discrimination against its Bengali-speaking staff - an allegation the company has strongly denied.

Several workers from Pantaloons, an Indian retail clothing chain, have been on an indefinite strike for the last six days at a Kolkata store after 25 staff members were allegedly suspended for singing the Indian national anthem in the shop.

Pantaloons issued a statement refuting the claims and said the employees were suspended for a “gross act of indiscipline which is being investigated”.

“Disciplinary action was taken due to a variety of reasons ranging from acts of violence in the presence of customers, disruption of  store operations, threatening female employees and abusing co-workers. Any other insinuation regarding the suspension letter is blatantly false," the company said in a statement.

The statement added that some misguided employees and external miscreants were illegally occupying a section of the Camac street store despite prohibitory court orders.

Many people are calling for a Pantaloons boycott after videos of staff leveling allegations of discrimination went viral on social media. In one such video, employees on strike can be seen with placards reading “we want justice from management”.

25 workers of @pantaloonsindia were suspended for singing National Anthem in Kolkata.

They are on dharna from last 6 days against the action.

Is top management aware of it?
Or doing this at the behest of TMC?

National Anthem is our Pride,how can anyone be retrenched for that? pic.twitter.com/eh1Dxzk7SD

My appeal to all non-Hindi people. @pantaloonsindia owned by Hindi imperialist Marwari @AdityaBirlaGrp has been systematically discriminating against Bengali staff in Bengal, firing them for speaking Bengali, calling Bengalis uncultured for not speaking Hindi. #BoycottPantaloons

​Pantaloons launched its first store in Kolkata, capital of the state of West Bengal, which was acquired by Aditya Birla Group from its previous owner Future Group.