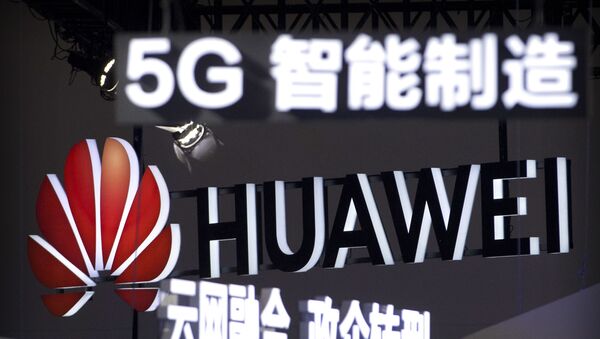 © AP Photo / Mark Schiefelbein
Subscribe
Huawei was excluded from Australia’s high-speed National Broadband Network in 2012 and from its super-fast 5G network in 2018. The company says it never had the chance to discuss the “boundaries” it would have to push to tap into the Australian market.

The UK’s decision to permit Huawei to play a limited role in its 5G roll-out has encouraged the company to try to overturn a ban on developing the promising technology in Australia.

Jeremy Mitchell, director of corporate and public affairs for Huawei Australia, told The Australian he had already met with Communications Minister Paul Fletcher as part of a new charm offensive.

“We met the minister last year and he made it very clear to us that the government’s 5G policy, as they see it, is not vendor-specific and not country-specific,” he recounted. “And we said to him, that’s great to hear.”

“But we want to know what the rules are, and what are the requirements to have 5G contracts in Australia and we want to meet them … But the UK decision provides a good viewpoint of what requirements they’ve made and what guidelines they’ve set in place.”

The UK on Tuesday decided to allow Huawei to help build parts of its 5G infrastructure. While assessing the world’s No.1 telecoms equipment vendor as a risky supplier, Boris Johnson’s government said it can provide 35 percent of the peripheral equipment, such as radio masts and antennas, but will be banned from supplying gear to “sensitive parts" of the network.

The following day, the EU closely mirrored Britain’s take on the issue in its non-binding 5G guidelines for member states.

The UK’s move ran counter to the lobbying efforts of the United States, which championed a global push to shut Huawei out of global 5G network development, citing security fears.

The US believes Huawei could use backdoors to monitor data transfers, track the locations of users or even spy on communications, and hand over that information to the Chinese government – something the company categorically denies.

Washington has also warned repeatedly that Huawei’s 5G involvement in the member states of the Five Eyes alliance between the US, the UK, Canada, Australia  and New Zealand would damage their intelligence-sharing ties.

Australia heeded those concerns and banned Huawei from taking part in the National Broadband Network project in 2012, before banning it in 2018 from providing 5G technology for wireless networks. It is still allowed to participate in 4G and 3G networks.

Huawei has won several major contracts in Australia: it has been selling kit to metro rail systems in Sydney and Perth, and was contracted last month to deliver Brisbane’s new digital signalling system. The firm is hopeful that it would “meet the requirements” to be allowed to participate in 5G – but has to learn them first.

Jeremy Mitchell lamented: “Unfortunately in Australia, we’ve never been able to sit down and have that conversation with the security agencies … about what are the boundaries, what are the requirements that we need to go through.”

“Our question is, if [the UK] can do it, why can’t Australia? We hope we can have a good, sensible, fact-based discussion about the possibility of using our leadership and innovation in Australia.”

The Australian understands that the government is “unlikely” to overturn the 5G ban, although some experts, including former defence deputy secretary Hugh White, are said to be in favour of this idea.

“The idea that we can solve that problem as the Turnbull government tried by saying we’re not having any part of that — I think the British decision shows that that approach is a bit unrealistic,” White was quoted as saying.

“We’re going to have to be a bit more sophisticated than that.”

000000
Popular comments
Australia is a vassal US state. If it follows US foreign policy and adopts unfair discriminatory trading rules against Chinese companies, then China is justified to retaliate and reduce imports of Australian coal.
Kiwi
30 January 2020, 09:20 GMT3
000000
The USA try to pressure coerce blackmail force specialy their vassals allies AKA poodle serfs minions to ban Huawei because they [USA] have Infiltrated Corrupted + Backdoored all 2/3/4G Networks around the Globe for years and spy on the 'World' 24/7 exploit it for their corrupt criminal malign activities. With Huawei 5G Network Technology implemented around the Globe, they will loose their stranglehold control advantages + leverage for good - That's their PROBLEM!! - They becomming more desperate + aggressive by the day - Everything else are Just WORDS and Oceans of Lies.