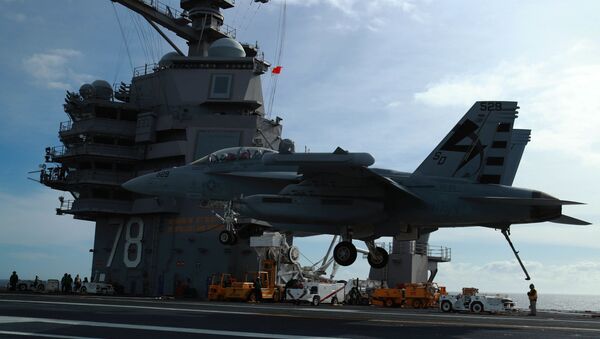 “What we’re doing is validating years of test catapult shots that were done at the EMALS test facility at Lakehurst, NJ, and years of arrestments on AAG at Lakehurst, then taking that data, bringing it to sea and using it on installed equipment aboard our ship, now in an austere underway environment with different wind and environmental conditions to build those safe flight envelopes,” Captain John J. Cummings, the USS Ford’s commanding officer, said in a Tuesday news release.

According to a November release, Navy requirements state the AAG must be able to make approximately 28 aircraft recoveries in 21 minutes. The service did not disclose recent numbers for the system in its latest release.

As of late, the carrier has utilized its unique ALRE systems in launching the E-2D Hawkeye, C-2A Greyhound cargo aircraft, EA-18G Growler and T-45 Goshawk training jet from its deck during the ACT runs.

According to the Navy, the USS Ford has conducted more than 70 successful launches and arrestments with the unique EMALS and AAG tech.

“We are pioneers in this new class to figure it out, and we will,” Cummings said, noting that these tests lay the groundwork for future Ford-class aircraft carriers. “Our crew is extremely proud to be a part of this historic event; to do this testing and get it to the fleet, and then get ready to accept all fleet aircraft.”

Cmdr. Mehdi Akacem, the Ford’s “air boss,” noted that members of the crew are “learning so much every day” aboard the first-in-class aircraft carrier and have begun “seeing improvements and in our knowledge, better reliability.”

News of the CVN 78’s ongoing ACT follows Acting Navy Secretary Thomas Modly’s announcement of a new series of certifications the aircraft carrier is expected to go through in order to be ready for deployment by October 2021 - the first quarter of fiscal year 2022.

“The American taxpayers have invested significant capital into this ship, and they deserve nothing less,” he said in an announcement to the service on December 19.

According to the list of deadlines, the USS Ford’s ACT is slated to conclude by March 2020, and the crew will then begin efforts to attain “Flight Deck Certification” for the planned deployment air wing.