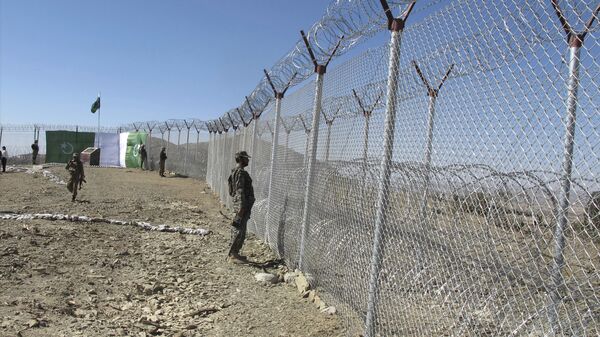 New Delhi (Sputnik): Pakistan and Afghanistan have been engaged in a war of words over the arrest of Pashtun leaders earlier this week. Islamabad accused the Pashtuns of acting against Pakistan on behalf of Afghanistan.

The Pakistan government has decided to close down the Torkham border with Afghanistan for security reasons after two mortars were fired from the Afghanistan side on Wednesday morning.

Pakistan Prime Minister Imran Khan had decided to keep the Torkham border crossing open 24/7 in a bid to enhance trade relations between Afghanistan and Pakistan.

“Two mortar shells were fired into Pakistan from the Afghanistan territory… Following the incident, the Torkham border gate was closed off for security reasons,” Pakistan Foreign Office spokesperson Aisha Farooqui said on Wednesday. However, the ministry added that no casualties were reported.

"The matter is being coordinated with Afghan authorities," she added in a statement.

Torkham is a major border point between the two countries with thousands of people crossing every day for trade purposes.

Update : The Torkham Border, which connects #Afghanistan and #Pakistan in #KhyberPakhtunkhwa , has been closed after two mortar shells were fired from the #Afghan side, said the Foreign Office pic.twitter.com/OvFBTZPSJZ

The recent tension between Afghanistan and Pakistan has been escalated after the arrest of several leaders of the Pashtun Tahaffuz Movement (PTM) including, Manzoor Pashteen, by Pakistani forces. The arrests have sparked anger among Afghan politicians.

Afghan President Ashraf Ghani in a tweet on Monday urged Pakistan to immediately release the leaders. “Differences with such peaceful movements (by PTM) must be resolved through dialogue and engagement,” Ghani said.

Pakistan Foreign Ministry termed the statement made by Afghanistan President as “an interference in Pakistan’s internal affairs and hence, unwarranted”.