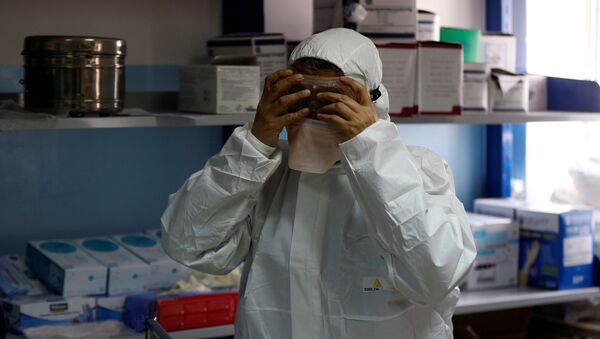 BEIJING (Sputnik) - The total number of confirmed coronavirus cases in China has reached 5,974 and the death toll from the new virus strain has gone up to 132, China's National Health Commission said.

A day earlier, the health authorities said that there were 4,515 confirmed coronavirus cases and 106 patients have died.

Over the past 24 hours, the health authorities received information about 1,459 confirmed new cases of pneumonia caused by a new type of coronavirus as well as recorded 26 fatal cases, of which 25 were in Hubei province.

"As of midnight on January 28 [16:00 GMT], the national health commission received information from 59 provinces [districts, cities under the direct jurisdiction of the central government] about 5,974 confirmed cases of which 1,239 are in grave condition, 132 have died, 103 people were discharged from hospitals," the statement read.

In addition, other 9,239 people are suspected of being infected. At the moment, 59,990 more people, who were in close contact with those diagnosed, are being monitored.

The unknown type of viral pneumonia was first detected in the Chinese city of Wuhan in late December. On Monday, the World Health Organization changed the global risk degree of the deadly coronavirus from "moderate" to "high."