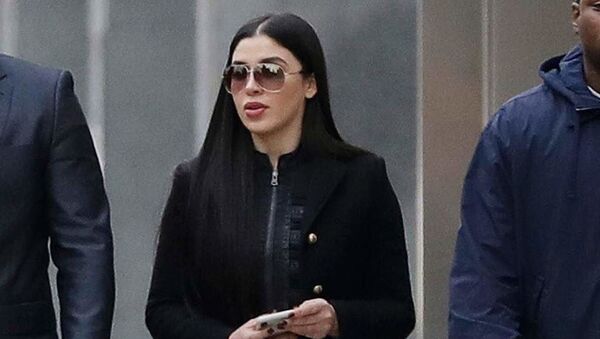 Emma Coronel reportedly set up her Instagram account, ‘therealemmacoronel’, a year ago to put an end to the wave of fake accounts pretending to be posting on her behalf. She deleted it half a year later in response to what she saw as unfair media reporting.

The wife of Mexico’s most notorious drug lord has got back on track with social media after a six-month hiatus as her husband is serving a life sentence in the United States.

Emma Coronel, the third wife of El Chapo, has shared a couple of snaps of herself wearing a black ski suit and a winter jacket at an unnamed ski resort.

Coronel, 30, said she married the former head of the murderous Sinaloa cartel in 2008 on the very day she turned 18. Once a teenage beauty queen, she is 32 years her husband’s junior and has two 9-year-old twin daughters with him.

She was reportedly very active on social media in the beginning of 2019 and even called on young designers to work for her proposed fashion line, named after El Chapo.

But she deleted all of her posts on Instagram in June, angered by what she viewed as unfair treatment by the media. One of the stories she posted before going radio silent was an angry reaction to a report that she had posed in a tunnel used by her husband in a prison break.

“F**k, I don’t go around the world posting pictures with double meanings or leaving messages, I don’t even realise it looks like what they say,” she wrote at the time.

El Chapo (real name: Joaquin Guzman) headed up Mexico’s largest and most powerful drug empire for decades, making an estimated criminal fortune of $14 billion. He daringly escaped from two Mexican jails in 2001 and 2015, the first time hidden in a laundry cart and the second through a tunnel dug to the shower inside his cell.

El Chapo was recaptured in 2016 and extradited to the United States the following year. He was convicted last February on 27 drug-related and murder conspiracy charges, and was sentenced to life in prison without the possibility of parole.

One of his top lieutenants has told a court in New York that Coronel had played a role in coordinating her husband’s second breakout from the prison. Coronel, who appeared regularly at El Chapo’s trial, did not comment on that testimony.

The former drug kingpin is currently locked up at the ADX federal maximum security prison in Colorado. He is banned from seeing his wife, but his children are still allowed visits. His lawyers are currently preparing to appeal his sentence.