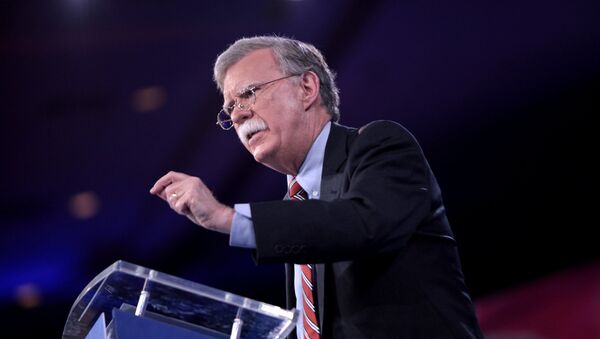 Oleg Burunov
All materialsWrite to the author
Leaked excerpts from former US National Security Adviser John Bolton’s upcoming memoir were published by The New York Times amid the ongoing Senate impeachment trial against President Donald Trump who has repeatedly rejected all the abuse of power-related accusations, slamming the probe against him as a “hoax”.

The New York Times (NYT) has cited an unpublished manuscript by former US National Security Adviser John Bolton as saying that he allegedly told Attorney General William Barr that he was concerned about President Donald Trump giving favours to the Presidents of Turkey and China. Trump fired Bolton in September due to disagreements on US foreign policy issues related to Iran, North Korea, Venezuela and Cuba, among others.

According to Bolton, Barr admitted to also being alarmed about Trump’s alleged discussions with Turkish and Chinese counterparts Recep Tayyip Erdogan and Xi Jinping, respectively.

Additionally, Bolton asserted that Barr told him that he was worried over Trump giving off the impression that “he had influence over independent Justice Department investigations relating to entities in both countries”, including the Chinese telecommunications firm ZTE and Halkbank, one of Turkey’s largest state-owned banks.

In 2018, Trump scrapped sanctions against ZTE, which were earlier slapped on the company for doing business with North Korea, Iran, and other countries. As for Halkbank, it was investigated over ostensibly helping Iran avoid US sanctions.

This came after the NYT published a leak from Bolton’s memoir late last week claiming that Trump told Bolton in August that he wanted to continue freezing $391 million in security aid to Ukraine until officials there assisted with investigations into the Democrats, including former Vice President Joe Biden and his son.

Trump was quick to reject the allegations on his Twitter page, insisting that he “never told” Bolton that the Ukraine aid was tied to any investigations into the Bidens.

Bolton and his publishers meanwhile said in a joint statement on Monday that the publishing team did not coordinate with the NYT on the release of information from his forthcoming book.

“Ambassador John Bolton, Simon and Schuster, Javelin Literary categorically state that there was absolutely no coordination with the New York Times or anyone else regarding the appearance of information about his book, the room where it happened, at online booksellers. Any assertion to the contrary is unfounded speculation”, the statement said.

Commenting on the matter, Ryan Cristian, founder and editor of the Last American Vagabond website, expressed frustration about “how these opportunistic ‘journalists’ can use the very same person they were not too long ago attacking, to bolster their rabidly anti-Trump agenda, while ignoring literally anything that challenges that agenda”.

Cristian insisted that such “journalists”’ proof “amounts to unverified allegations made by a disgruntled John Bolton in his book, which he is trying to sell”.

“How in the world is that even close to proof? If Bolton testifies, and produces something more than his word, well, then it becomes something else entirely. Yet the MSM is right now selling everyone Bolton's forceful claims as proof, simply because they WANT it to be. And that ladies and gentlemen, is not journalism, that is propaganda”, Cristian claimed.

This comes amid the ongoing Senate trial against Trump which was launched after the Democrat-controlled House of Representatives impeached POTUS 18 December on charges of abuse of power and obstruction of Congress.

The lawmakers claimed Trump requested that Ukraine investigate corruption involving the Bidens by leveraging congressionally approved military assistance to Kiev. Trump denied all the accusations, blasting the impeachment probe against him as a hoax and a political witch hunt.