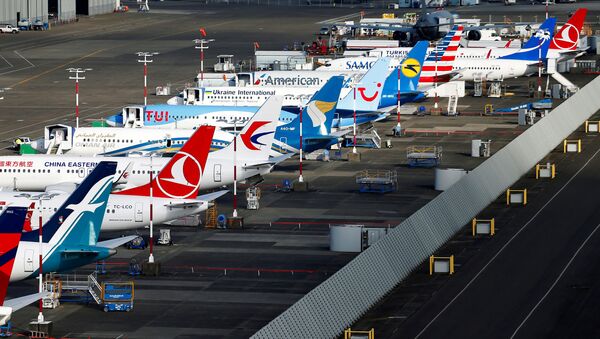 © REUTERS / Lindsey Wasson
Subscribe
International
India
Africa
Aerospace company Boeing is continuing to endure fallout from the grounding of its 737 MAX, as the company announced its fourth-quarter results showed a 37% drop in revenue compared to last year’s period.

The international grounding of the 737 MAX “significantly impacted” the financial results of Boeing in 2019, according to the company’s release on its fourth-quarter earnings.

This report of Boeing’s losses comes one week after it was reported that the company is currently in talks with a number of banks to secure a loan of $10 billion or more.

"We recognize we have a lot of work to do," said Boeing President and Chief Executive Officer David Calhoun in the Wednesday press release. "We are focused on returning the 737 MAX to service safely and restoring the long-standing trust that the Boeing brand represents with the flying public. We are committed to transparency and excellence in everything we do.”

Calhoun, a member of Boeing’s board of directors since 2009, was appointed president and chief executive of the company earlier this month after the ousting of former CEO and President Dennis Muilenberg.

“Safety will underwrite every decision, every action and every step we take as we move forward. Fortunately, the strength of our overall Boeing portfolio of businesses provides the financial liquidity to follow a thorough and disciplined recovery process,” Calhoun added.

The company has previously received pushback from the US Federal Aviation Administration (FAA) concerning its estimates of when the 737 MAX will return to the skies. Last month, FAA chief Steve Dickson told then-CEO Muilenburg that he was “concerned that Boeing continues to pursue a return to service schedule that is not realistic due to delays that accumulated for a variety of reasons.”

Furthermore, the publishing of internal messages sent between Boeing employees has more than likely contributed to the company’s unfavorable numbers in the market.

The messages, which were provided to the FAA and lawmakers prior to their release, showed employees not only trashing customers such as Lion Air, but also revealed that Boeing workers were not confident in the 737 MAX several months before the two crashes involving the plane that claimed the lives of 346 people.

"Would you put your family on a MAX simulator trained aircraft? I wouldn't,” asked one employee of another in February 2018, eight months before the Ethiopian Airlines Flight 302’s 737 MAX crashed minutes after leaving Addis Ababa Bole International Airport. The other employee responded “no.”

Possibly trying to make up for lost revenue, Calhoun said on January 22 that Boeing would not wait around for the FAA’s regulatory approval before it resumes production of the 737 MAX, which the company’s board of directors temporarily halted following the FAA’s December admonishment of Boeing.