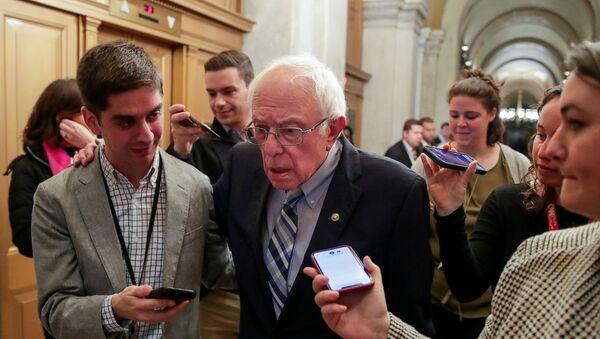 “As the only leading presidential candidate to oppose Trump’s NAFTA 2.0, I am pledging today that upon being sworn in as president, I will immediately begin renegotiating this disastrous deal to combat climate change, stop the outsourcing of American jobs and end the destructive race to the bottom,” Sanders said in a statement on Wednesday, following the signing of the new deal, according to The Hill.

I proudly oppose Trump's NAFTA 2.0. The United States outsourced more than 170,000 jobs in the last three years. The deal doesn't even mention the words "climate change."

Our trade agreements must stop outsourcing and address the climate crisis threatening our planet. https://t.co/5b0nDs9ruv

Sanders repeatedly slammed the USMCA agreement, one of 10 US Senators who voted against the deal. He is the only Democratic presidential candidate to oppose Trump’s deal with the two countries bordering the US.

“It does not even mention the words 'climate change', the most existential threat facing our planet,” Sanders stated. “We need a trade policy that works for the working class and improves the environment. And that's exactly what I will fight for as president.”

Earlier in the day, Trump signed the US-Mexico-Canada trade deal to replace the 1994 NAFTA agreement. The new deal was signed in November 2018, following two years of negotiation between the three nations, but has gone through significant modifications following the introduction of several amendments.