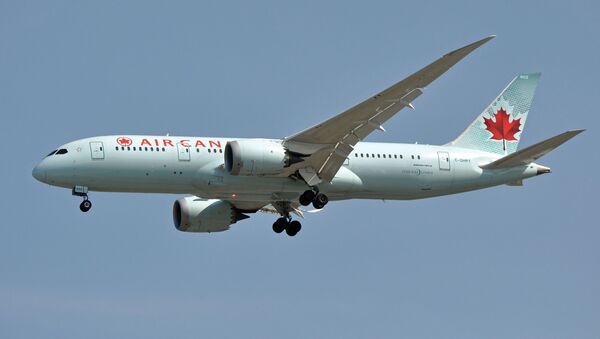 CC BY 2.0 / ERIC SALARD /
Subscribe
TORONTO (Sputnik) - Canada’s national carrier Air Canada said in a statement on Wednesday that it is suspending direct flights to Beijing and Shanghai, effective 30 January.

"Following the government of Canada's advisory to avoid non-essential travel to mainland China, [Air Canada] is temporarily suspending all direct flights to Beijing and Shanghai effective January 30, 2020 until February 29, 2020," the statement said.

The carrier apologised for "the serious disruption to our customers' travel plans", noting that it will continue " to monitor this evolving situation closely in consultation with the Public Health Agency of Canada, Transport Canada and Global Affairs and will adjust its schedule as appropriate".

The airline said the last flights departing Canada would leave today, and the last inbound flights would arrive tomorrow.

Air Canada has joined nearly a dozen air carriers that have grounded or limited their flights to mainland China. They include Spain’s flag-carrier Iberia, British Airways, Lufthansa, American Airlines and United Airlines.

Earlier in the day, Canadian Foreign Minister Francois-Philippe Champagne told reporters that Ottawa is updating its travel advisory for China, urging all Canadians to avoid non-essential travel to the country.

"We have changed our travel advisory to advise Canadians to avoid non-essential travel to China," Champagne said.

Global Affairs Canada said on its website on Wednesday that Canadians should "avoid non-essential travel to China due to the imposition of travel restrictions and quarantines in parts of the country in order to limit the spread of a novel coronavirus."

The travel advisory is a step up from an advisory issued on Monday, in which Canada urged travelers to only avoid the Chinese province of Hubei, the epicenter of the deadly coronavirus outbreak.

On 29 January, Russian Deputy Prime Minister Tatyana Golikova announced that Moscow would suspend most railway service with China beginning 31 January, in a bid to prevent the spread of the coronavirus infection in the country, with trains allowed to move only on the Moscow-Beijing route, in both directions.

A decision on flights to and from China would be made no later than Friday, according to Golikova.

The outbreak of what has been identified as a new coronavirus strain began late December 2019 at a seafood market in Wuhan in central China, before quickly spreading across the country. The number of those infected has exceeded 6,000, while over 130 have died.