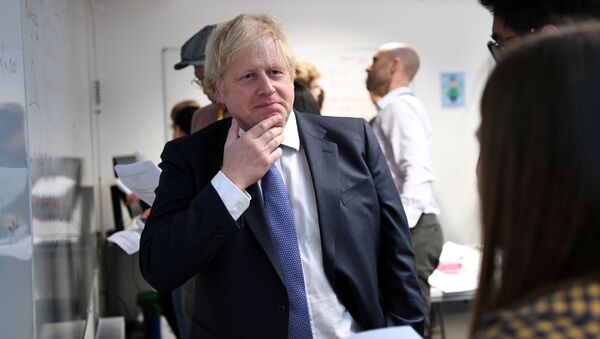 Demond Cureton
All materialsWrite to the author
The announcement comes after a crucial National Security Council meeting with UK security experts and officials, in addition to months of political wrangling between London and Washington over the Chinese tech giant's role in building 5G across Britain, with intense pressure from US leaders.

The United Kingdom will allow Huawei Technologies a limited role in building the nation's 5G networks across the country, it was announced on Tuesday.

London said that the Chinese tech giant could participate in building Britain's high-speed wireless networks, but would be excluded from "core" parts and impose a 35 percent cap on involvement in non-sensitive parts.

Huawei would also be excluded from all safety-related and safety-critical networks, including those of sensitive geographic locations such as nuclear sites and military bases, the government said.

The announcement was published in detail by the Department for Digital, Media, Culture and Sport and UK National Cybersecurity Centre, which follows a Telecoms Supply Chain Review in July last year.

Digital Secretary Baroness Nicky Morgan said in a statement on Tuesday that the UK wanted "world-class connectivity" as soon as possible without compromising national security.

The government had reviewed its supply chain for telecom networks, concluding it was "necessary" to tighten restrictions on "high risk vendors", she said.

She said: "This is a UK-specific solution for UK-specific reasons and the decision deals with the challenges we face right now.

UK National Cyber Security Centre CEO, Ciaran Martin, said that the decision would "ensure that the UK has a very strong, practical and technically sound framework for digital security in the years ahead".

He concluded: "Taken together these measures add up to a very strong framework for digital security.

Commenting on the decision, Huawei vice-president Victor Zhang said on Tuesday that his company was "reassured" by the UK government's confirmation and could continue working to "keep the 5G roll-out on track".

Speaking on Huawei's 15-year relationship with the UK, Mr Zhang said: "We will build on this strong track record, supporting our customers as they invest in their 5G networks, boosting economic growth and helping the UK continue to compete globally.

He concluded that his company agreed that diverse vendor markets and fair competition were "essential" for network reliability, in addition to offering customers access to "the best possible technology".

Reponding to London, a senior official from the Trump Administration said that the US was "disappointed" by the UK's decision to use Huawei in its 5G network.

The official, speaking on conditions of anonymity, said that there was "no safe option for untrusted vendors to control any part of a 5G network".

The official concluded: "We look forward to working with the UK on a way forward that results in the exclusion of untrusted vendor components from 5G networks.

Former US House of Representatives speaker, Newt Gingrich, said that the decision was an "enormous strategic defeat" for the United States.

The news comes just hours after European Union commissioner Thierry Breton announced in Brussels that EU member-states would choose tighter restrictions over an outright ban of the Chinese tech giant.

US officials from the Trump administration, namely US secretary of state Mike Pompeo, persistently cautioned UK prime minister Boris Johnson in recent months to impose a blanket ban on Huawei, citing 'national security concerns' that the IT equipment could be used to spy for the Chinese government, with both Huawei and Beijing continuously and routinely slamming the accusations as false.