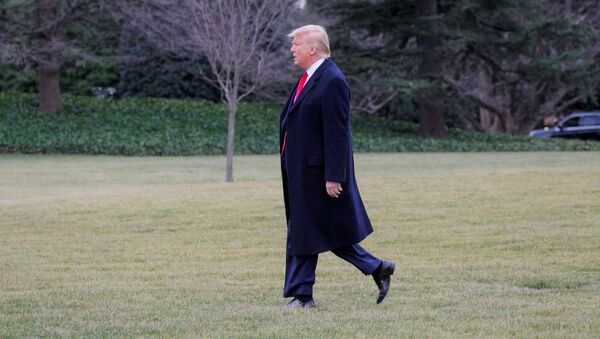 WASHINGTON (Sputnik) - US President Donald Trump’s Mideast peace plan undermines the security of Israel and the United States by threatening to unleash violent blowback in the Palestinian territories and in neighboring Jordan, Senator Chris Murphy warned in a series of Twitter messages.

"The plan allows Israel to control all security matters inside the Palestinian ‘state,’ and thus it's not a state at all," Murphy said. "The unilateral [Israeli] annexation of the Jordan River valley and existing settlements, deemed illegal under US and international law, will set back the peace process decades. And it risks real violence and massive destabilization inside places like Jordan."

The plan allows Israel to annex Jewish settlements throughout the West Bank, keeping the territory fragmented into Arab and Jewish zones policed by the Israeli military. In exchange, Israel pledges to halt construction of new settlements for four years. It also calls for Israel’s annexation of the Jordan River valley as a special security zone.

The plan offers some carrots for the Palestinians by proposing to double the size of Palestinian territories through a series land swaps and calling for $50 billion to fund Palestinian infrastructure projects.

Murphy, however, said the plan’s potential to unleash violence compromises the long-term security of both Israel and the United States.

2/ Any claim that this plan envisions a Palestinian state is just false. The plan allows Israel to control all security matters inside the Palestinian "state", and thus it's not a state at all.

4/ I remain a devoted supporter of Israel and our commitment to their security and defense. But this proposal compromises the long term security of both Israel and the United States. That's why I oppose it.

Even before Trump and Netanyahu announced details of the plan on Tuesday, the effort was rejected by Palestinian officials, in part because the initiative was negotiated almost exclusively by Israel and the United States, with little or no input from Palestinians.

Palestinians continue to seek East Jerusalem as the capital of a future Palestinian state, the dismantling of Jewish settlements and the return of Palestinians refugees - scattered in nearby countries during Israel’s 1947-49 war for independence - to their former homes inside of Israel.