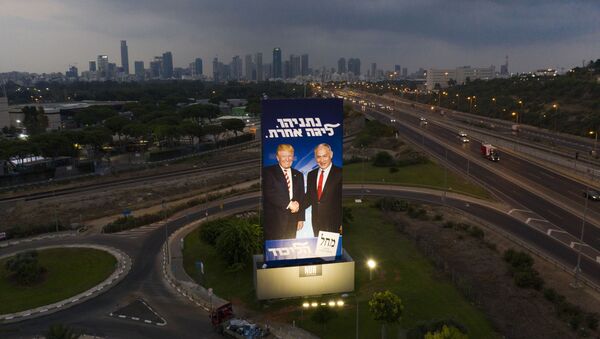 The Palestinian Authority announced two days of rage in response to the long-delayed peace plan expected to be released by the US administration later today. But while tensions in the PA are brewing, Hamas, which controls the Gaza Strip, seems to be quite exhausted from the ongoing confrontation with the Jewish state.

All eyes are on Washington today as US President Donald Trump is preparing to roll out his "deal of the century" plan, aimed at resolving the Israeli-Palestinian conflict.

The initiative - that will be released later today and will be concluded by a joint press conference between the American leader and Israel's Prime Minister Benjamin Netanyahu - is set to keep Jerusalem in the hands of Israel, with the Palestinians getting access to the disputed city.

It also presupposes that the Jewish state will be able to annex some 40 percent of the West Bank, considered Palestinian land under international law, while the Palestinians will be compensated for the loss by getting territories in the Negev desert, located in southern Israel.

Palestinians are also promised to be given some $50 billion dollars and an independent state if they accept the offer and if they disarm Gaza's military groups such as Hamas and the Islamic Jihad, both considered terrorist organisations by Israel.

Hussam El Dajani, a political writer and analyst from Al Omma University in Gaza, says the deal has zero chances to succeed.

"No Palestinian will accept this deal," he said, adding that the general feeling is that some parts of the plan are already being implemented on the ground.

This is expressed not only in the fact that the US administration recognised Jerusalem as the capital of Israel in 2018 by moving its embassy to the city, but also in Tel Aviv's continuous settlement activity in the West Bank.

Between 1967, when the area was captured from Jordan, and 2017, Israel has established more than 200 settlements in Judea and Samaria, the Jewish name for the West Bank, with the government announcing more construction in the predominantly Palestinian city of Hebron.

This time, says El Dajani, Palestinians are not going to take it lightly. The Palestinian Authority has already announced two days of rage on Tuesday and Wednesday warning it would not prevent people from venting their anger at the US peace plan and putting Israel's military and security agencies on high alert.

But unlike in the West Bank, where most demonstrations will take place, Gaza under Hamas seems to be quiet and El Dajani says he has an explanation.

"Firstly, Hamas wants to give more space to the resistance in the West Bank to raise their voice against the Israeli occupation and, secondly, the Islamic group knows that it cannot handle another confrontation with Israel".

The most recent war between Israel and Hamas that occurred in 2014 resulted in the death of more than 2,200 Palestinians, many of whom were civilians, and dealt a severe blow to the infrastructure of the Strip.

According to official data, Israel, which launched the attack in response to the murder of three hitchhikers and insisted it was trying to put an end to the indiscriminate rocket fire launched towards the country's southern communities - destroyed more than 18 thousand housing units and over 70 medical facilities.

"Back then, the entire world criticised Israel for its actions. Now, however, the international community remains quiet as the US and Israel promote a plan that will continue to harm the Palestinian people".

While the world is watching

And El Dajani believes the deal has been Okayed by such countries as Egypt, Jordan and Saudi Arabia.

"Cairo has been supportive of the American plan but could never say it in public, Jordan is reliant on the American aid and will not dare to speak up and the Saudis have started doing business with Israel."

Reports suggest that for the first time since the establishment of the Jewish state in 1948, Israelis, who have been permitted to visit the kingdom for religious purposes only, are now allowed to go there for business and investment trips,according to allegations that Riyadh has never confirmed.

"The general feeling is that the Arab world and the international community care less about the Palestinian issue than they did in the past," said El Dajani.

Part of the reason, says the expert, is the situation in other areas of the Middle East, that have distracted the public attention from the Palestinian cause. The Arab Spring that erupted in 2011 and that toppled governments has also led to the death of hundreds of thousands and the displacement of millions.

However, the main reason for the world's decreased interest in the Palestinian issue lies in the divisions within Palestinians themselves.

"Fatah and Hamas have been unable to overcome differences and put aside their bitter memories," said El Dajani, referring to Hamas' violent takeover of the Gaza Strip in 2007 that led to the deterioration of ties between the two main factions.

"In the end of the day, those, who pay the price for the lack of unity, are the Palestinian people, simply because it harms our chances to resist Israel."