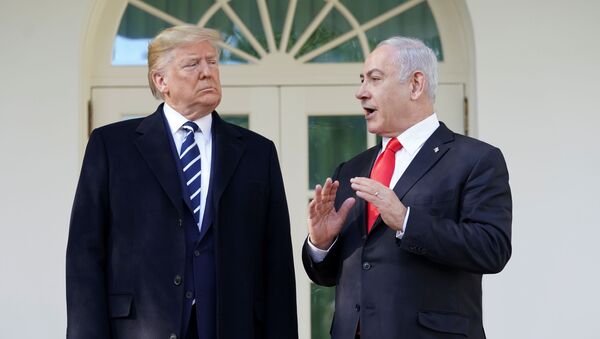 US President Donald Trump is unveiling his peace plan for the Israeli-Palestinian conflict during a joint press statement with Israeli Prime Minister Benjamin Netanyahu at the White House.

This comes following Trump's meeting with Netanyahu and Israeli opposition leader Benny Gantz in Washington earlier in the day.

The US started working on the Mideast peace plan, which was described by Trump as the "deal of the century", three years ago, with Trump's son-in-law and adviser Jared Kushner overseeing the process. The release of the plan has been postponed several times for different reasons.

The Saudi Arabian Foreign Ministry said in the statement that Riyadh appreciates efforts made by US President Donald Trump to develop a comprehensive peace plan between the Palestinian Authority and Israel, adding that Saudi Arabia encourages direct negotiations between the two sides under the auspices of the United States.

UN Secretary-General Antonio Guterres has seen the US peace plan to resolve the Israeli-Palestinian conflict which President Donald Trump revealed on Tuesday and he supports Palestinian-Israeli talks on basis of previous resolutions, including international law, bilateral agreements and realizing vision of two state solution based on pre-1967 borders, according to spokesperson Stephane Dujarric.

"This initiative raises issues that we will now discuss with our partners in the EU. Among other things, these are questions about the involvement of the parties to the conflict in the negotiation process, as well as its (the initiative's) attitude towards internationally recognized parameters and legal positions", the German Foreign Ministry quoted Maas in a statement as saying.

The Egyptian Foreign Ministry called Tuesday on Israel and the Palestine Authority to carefully consider the unveiled "deal of the century" and hold talks under the auspices of the United States.

The Turkish Foreign Ministry slammed the Middle East peace plan as a still-born deal aimed at annexation of palestinian territories.

"This plan is an annexation plan that is aimed at killing the two state solution and stealing Palestinian lands", Turkish Foreign Ministry said in a statement.

"This alleged US peace plan is stillborn. It aims to destroy the settlement process between the two states and to facilitate the annexation of Palestinian lands by Israel [...] The Palestinian people and their lands are not for sale. Jerusalem is a red line. We will not allow any steps aimed at legalizing Israeli occupation and oppression", the statement said.

According to Iranian Foreign Ministry spokesman Abbas Mousavi, Tehran is ready - despite differences with other regional countries - to cooperate and counter "the plot against the Islamic world hiding behind the deal of the century".

"Such evil projects are doomed to fail", Mousavi said, regarding the deal on the possible future for Israel and Palestine.

"This is clearly a serious proposal, reflecting extensive time and effort [...] We encourage them (leaders) to give these plans genuine and fair consideration, and explore whether they might prove a first step on the road back to negotiations", Raab said in a statement, cited by Reuters.

Lebanon's Shia movement Hezbollah said Tuesday that the peace plan would not have happened without "complicity and betrayal" of several Arab states, adding that the plan is a very dangerous step which will have negative consequences on the future of the entire region, according to the Al Manar broadcaster.

"The settlement project under this deal is one of the biggest dangers and aims to do away with the right of return and to rob the Palestinian people of the right to their land ... and to create social and demographic tension and sedition that only serve the enemy's interests and expansionist goals", Hezbollah said in a statement, cited by the Al Manar broadcaster.

"Jordan supports any real effort to achieve just and comprehensive peace that the peoples will accept and stresses the need for direct talks that will resolve the issue [...] In accordance with generally accepted principles, Arab peace Initiative and international resolutions [...] Israel's unilateral measures push the region toward further escalation", Jordan's Minister of Foreign Affairs Ayman Safadi said Tuesday, commenting on the US plan for the peace in the Middle East, according to the official news agency Petra.

Peace in the Middle East requires direct talks, it is unclear if a solution acceptable to both Israel and Palestine has been found, Russian Deputy Foreign Minister Mikhail Bogdanov said regarding the US Mideast deal unveiled earlier on Tuesday.

"We think they should have direct talks and reach mutually acceptable compromise. We do not know if the US proposal is acceptable for both sides. We have to wait for the reaction from both sides," Bogdanov said.

The Trump administration's Israel-Palestine peace plan will incorporate a previously announced package of $50 billion designed to boost the Palestinian economy, the White House said in a statement on Tuesday.

"The Vision incorporates the massive $50 billion Peace to Prosperity economic plan, which will spur the Palestinian economy," the release said. "When properly implemented, the Vision will: Create more than 1 million new jobs; More than double Palestinian GDP; and Reduce unemployment below 10% and cut the poverty rate in half."

White House officials rolled out the economic portion of the peace plan during a conference in Bahrain in June.

"This is a deal between the Zionist regime (Israel) and America. Interaction with Palestinians is not on its agenda. This is not a peace plan but a plan of imposition and sanctions," Iran's presidential adviser Hesameddin Ashena tweeted after Trump unveiled details of his Mideast peace plan in Washington.

"The leaders also discussed the United States’ proposal for peace between Israelis and Palestinians, which could prove a positive step forward," the statement said.

"We will form a joint committee with Israel to convert the conceptual map into a more detailed and calibrated rendering so that recognition can be immediately achieved," Trump said.