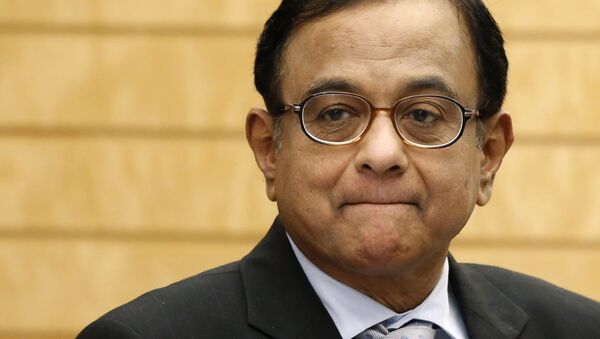 Ashutosh Kumar
Sputnik correspondent
All materialsWrite to the author
New Delhi (Sputnik) - At a time when growth is at a six-year low, inflation is rising, private investments are hard to come by and there is an overall sense of economic gloom, India is pinning its hope on the upcoming national budget, to be tabled by Finance Minister Nirmala Sitharaman on 1 February.

Stating that too much of a sacrifice on fiscal consolidation may be bad, a key politician of India’s main opposition party Congress and former Indian Finance Minister, P. Chidambaram, in an interview with Sputnik in New Delhi, said India’s growth has slumped because of wrong decisions like 2016's Demonetisation and the 2017 implementation of Goods and Services Tax by the ruling BJP government.

Ahead of country's budget 1 February presentation, Chidambaram said it would not surprise him if India’s growth rate drops below the 4.8 percent mark recently forecast by the International Monetary Fund (IMF) for the current financial year (April 2019 – March 2020).

Having served thrice as finance minister in the last two-and-a-half decades, Chidambaram, a strong critic of Narendra Modi's government policies, spoke about a range of issues concerning the Indian economy, nationally and internationally.

Sputnik: From a high of 8 percent in April-June 2018, GDP growth has come down to 4.5 percent in July-September 2019. Be it advanced estimates, India’s apex bank RBI or IMF, or the ratings agencies, everybody has done a downward revision in projections. What has gone wrong with the Indian economy?

P Chidambaram: The government took wrong decisions. Demonetisation was wrong. Implementation of Goods and Services Tax was wrong, so called remedial measures that they took to arrest the slide in the economic growth were wrong. The cumulative effect of all these wrong decisions is that the growth has slumped to 4.5 percent in the July-September quarter. Growth in the whole year may end up below 5 percent.

Sputnik: In a recent tweet, you reacted to the IMF's lowering of India growth projections to 4.8 percent and said ‘even the 4.8 percent is after some window dressing. I will not be surprised if it goes even lower’. What window dressing are you referring to and how low will the GDP drop?

P Chidambaram: IMF is accepting the government of India’s base year, and methodology. IMF is simply making a projection based on these factors. IMF has projected 4.8 percent growth for this year. But we are questioning the methodology that is employed by the government. I won’t be surprised if the rate of growth goes below 4.8 percent.

Sputnik: At this rate, do you think a $5 trillion economy is achievable in the next five years? At this rate, how long will it take to reach this target?

Sputnik: The national budget is to be published on 1 February. At a time when growth is down and inflation is rising, what should be the key budget priorities for the government?

P Chidambaram: That’s not for an Opposition member to say. We have never been consulted by the government. All the information and data are not being shared with us. We only have statistics whose credibility has come under serious question for the last two years. Therefore, it is unfair to ask an Opposition Member of Parliament what should the government do. Actually, the government should tell us what it intends to do and ask for our feedback on those proposals. In such an event, the opposition can give its feedback. But without knowing what the government is intending to do, I think it will be inappropriate for me to advise the government, especially when the government has not sought my advice.

P Chidambaram: Well, one is not contradictory to the other. According to me, the mandate of any government is to maintain financial stability, promote growth and contain inflation. Sometimes, when growth slides because of external factors, it may be necessary to sacrifice a bit on fiscal consolidation and boost growth. But too much of that is also bad. So, one has to strike a balance between fiscal stability and growth. But where will the government strike a balance, I do not know. For example, it can strike a balance at 3.3 percent fiscal deficit and 5 percent growth, or 4 percent fiscal deficit and 6 percent growth. But that’s a choice the government has to make. I hope it makes a right choice.

Sputnik: Indian trade is dwindling. What has gone wrong?

P Chidambaram: Exports is the saddest story of this government. For five months and eight months successively, imports and exports have been negative over the previous year. This government has practically abandoned trade as an engine of growth. The main reason is that this government is essentially protectionist. A protectionist government would not put much faith in trade. We are hopelessly wrong in that and India is paying a huge price in terms of losing volumes, market shares and jobs in India.

Sputnik: You talked about protectionism by the government. Recently, the founder of Amazon was snubbed by the Indian government over a $1 billion investment in India for 2020. At a time when Indian multinational corporations are not making investments despite a corporate tax cut, how do you view the strident position taken by India against overseas investments?

P Chidambaram: We have criticised it. We think that the minister of commerce was totally wrong when he tried to snub Jeff Bezos. Whether Jeff Bezos is losing money, yet investing in India, it is his business. If despite losing money, he is anxious to invest in India, why should we complain? What is important for us is that he is willing to put in huge amount of money in India and create a huge number of jobs in the country. Whether he is making a loss or a profit is his business. Why should the Indian minister of commerce snub him for promising to make investments and create jobs in India is beyond my comprehension.

Sputnik: Billionaire George Soros has said that the democratically-elected Narendra Modi government is creating a ‘Hindu Nationalist state’ and alleges that the move is a frightening setback in India. Do you believe that the unrest on new citizenship law may prevent new investment and negatively affect the business environment?

P Chidambaram: Soros is an important voice but he is expressing his personal opinion. I don’t think I need to comment on what Mr. Soros said. In India, we have been saying that the policies that the Indian government is following, especially socio-political policies are creating a lot of uncertainties in people’s mind. It’s also leading to public disorder. If there is uncertainty and public disorder, investment will be affected as a consequence. No investor will come to invest in country hit by uncertainty and disorder. We have said this many times. It appears that Mr. Soros has simply endorsed what we are saying.