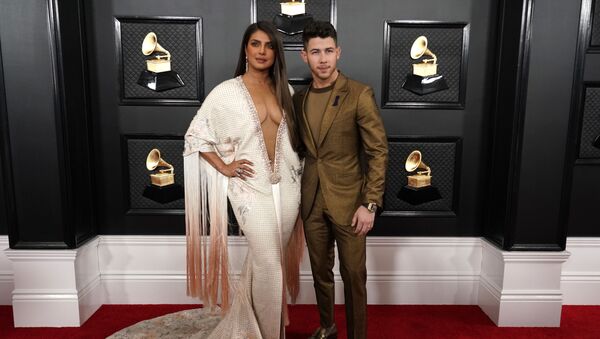 New Delhi (Sputnik): As the 62nd annual Grammy Awards kicked off at the Staples Center in Los Angeles, California, the news of the demise of basketball legend Kobe Bryant and his 13-year-old daughter had just started to sink in. Bryant was among nine passengers who died on Sunday in a helicopter crash in Calabasas, California.

Indian-American Actress Priyanka Chopra surely knows how to make a timely statement with her every move. The star caused a buzz by walking down the red carpet at the Grammys with the five-time NBA champion’s jersey number "24" painted on her index fingernail.

Chopra appeared at the Grammys with husband Nick Jonas by her side and detail to her manicure to pay tribute to Bryant’s legacy. The actress also took her Instagram stories to say #RIPMamba by sharing a picture of her nail with “24” written on it.

A post shared by Getty Images Entertainment (@gettyentertainment) on Jan 26, 2020 at 4:06pm PST

She also shared a picture of Bryant and his daughter Gianna with a caption expressing grief about his death and saying: “He inspired an entire generation. His legacy is so much bigger than basketball. This heartbreaking accident also took the life of his young daughter, Gianna. I’m shook and so saddened. My heart goes out to Vanessa, Natalia, Bianka, and Capri Bryant".

Kobe Bryant was my first real introduction to the NBA. I was 13 living in Queens NYC, the same age as his sweet little girl, Gianna. He ignited my love for the sport, competition, and striving for excellence. He inspired an entire generation. His legacy is so much bigger than basketball. This heartbreaking accident also took the life of his young daughter, Gianna. I’m shook and so saddened. My heart goes out to Vanessa, Natalia, Bianka, and Capri Bryant. You are in my thoughts. Also sending my condolences to the loved ones of the other family and pilot in the accident. Being at tonight’s Grammys ceremony in his home at the Staples Center is going to be surreal. 💔 #RIP #KobeBryant #RIPMamba

The awards took place at Staples Center, where the star and his team played for years, and which had been his “home” for 20 seasons.

Prominent people from India and netizens are also mourning the tragic death of Bryant by expressing condolences to the star's family, leading to #Blackmamba and #RIPMamba trending on Twitter.

The world has lost a legend, and a family has lost its light. May the prayers of millions of people from around the world give #KobeBryant ’s family and those of the others who died in this heartbreaking tragedy courage and strength. #RIPMamba pic.twitter.com/KUGm6UtLBj

His legacy will live on forever. Rest In Peace, Kobe. #RIPMamba @NBA pic.twitter.com/lsA1eZzN7p

Heartbreaking to hear about Kobe, his daughter and everyone onboard the helicopter. Shocking tragedy.
Sincere condolences to the friends & family. #RIPMamba 🙏 pic.twitter.com/M1AYxnkqkW

American singer and Grammys host Alicia Keys also began the ceremony by paying an emotional tribute to Bryant with a performance of the Boyz II Men song "It’s So Hard to Say Goodbye to Yesterday”.

"We are literally standing here heartbroken in the house that Kobe Bryant built."@aliciakeys pays tribute to start this year's #Grammys #RIPMamba pic.twitter.com/dQPf8juQSZ

Bryant was known as “Magic Mamba” for his ability to mimic a snake and his nearly lethal shooting skills. He announced his retirement from the game in 2016 as a five-time NBA champion. He also won gold at the 2008 Beijing Olympics and the 2012 London Olympics.