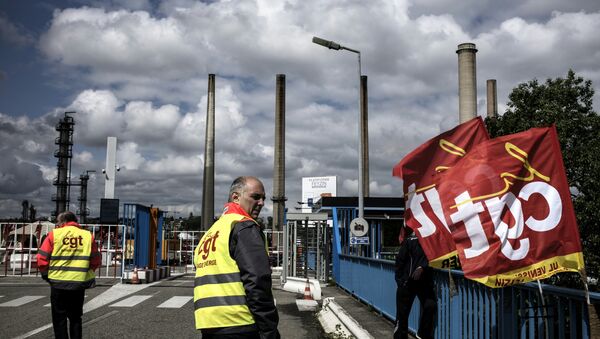 © AFP 2021 / JEFF PACHOUD
Subscribe
A number of French towns’ authorities, as well as non-governmental organisations have come to believe that oil firm Total doesn’t meet the so-dubbed “duty of vigilance” law on transparency over environmental protection.

In an unprecedented effort, four French local authorities and several NGOs will collectively sue the French oil firm Total this week. The goal is to try to force the firm to drastically drive down its greenhouse gas emissions, in the first climate change litigation against a private firm in France, The Guardian reported.

A court summons is slated for Tuesday, in Nanterre on Paris’ outskirts.

The towns that have pioneered the case range from Bayonne, in the southwest, to La Possession, on Réunion Island in the Indian Ocean, and Sevran, north of Paris. They argue that the climate emergency is already being felt by ordinary citizens and not enough is being done by large firms.

France has a separate law called “the duty of vigilance”, whereby large companies must be vocal about their preventive measures (if any) to counter human rights violations or environmental damage that their activities cause.

The non-governmental entities bringing the case said Total had not included enough substantial detail in its vigilance plan to curb emissions, accusing the firm of failing to operate in line with the Paris climate accord goals, which sets out greenhouse gas reduction targets, to curb global temperature rises.

According to research conducted last year, Total is on the list of top 20 global fossil fuel companies whose joint exploitation of the world’s non-renewable fuel resources has been estimated to account for a third of all greenhouse gas emissions.

Per the initiators of the historic lawsuit, the firms must be held responsible for their environmental failures.

Patrick Pouyanné, Total’s chief executive, met the NGOs and local authorities as they raised the issue last year. The firm is reportedly set to argue that it is fulfilling its obligations and is ready to produce an overview in March detailing the measures taken.

According to Pouyanné, the climate debate was “too black and white”, that there should be enough time for change as it is impossible to make fossil fuels disappear with “a wave of a magic wand”.

European Union member states are understood to be on course to set a carbon border tax, which opens a solid prospect of another escalation in tensions in trade and eco-protection with the United States, the world’s biggest carbon emitter, who unilaterally withdrew last year from the Paris accord.

US Trade Secretary Wilbur Ross has warned about an imminent retaliation to the EU if it floats a carbon tax on the United States.