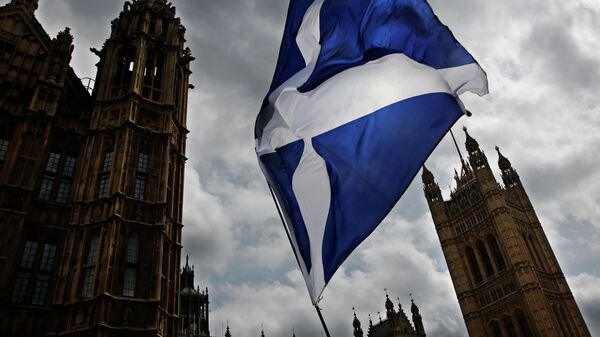 Tommy Sheridan
All materials
Scotland’s First Minister Nicola Sturgeon is an elected politician with considerable talents and a formidable political record of campaigning and successful electioneering stretching back over three decades.

This week she will need to draw on her personal courage, political nous and inherent confidence in Scottish people when she makes the most significant speech in her career at the Scottish Parliament this coming Friday, 29th January.

The campaign to secure Scotland’s return to the normal status of an independent nation has reached a critical tipping point in my opinion. The very essence of democracy now faces the stiffest examination I have ever witnessed in my lifetime. Nearly six years ago Scotland’s first independence referendum was held with the agreement of Westminster. Such a route to independence was not always the policy of the Scottish National Party (SNP).

Formed in 1934 the SNP fought the 1997 General Election on a very clear manifesto commitment. Under the heading ‘Gaining Independence’ that Manifesto proclaimed:

The SNP secured a very credible 621,550 votes in Scotland, 22% of the total votes cast, on that clear route to independence and doubled their number of MPs from three to six. Nicola Sturgeon herself fought the Govan constituency in Glasgow under that manifesto and secured 11,302 votes, a very credible 35% of the votes cast and a 7.4% increase on the previous general election of 1992.

Scottish Nationalists Urge Johnson to Unveil Report on Alleged Russian Meddling – Reports
So both the SNP and the First Minister have not always adhered to a Westminster agreed Referendum route to independence. In fact the ‘majority of MPs elected to Westminster’ route was SNP policy for 63 years while the referendum route has only arisen over the last decade. The point is there is no single, universally accepted route to independence for Scotland or indeed any other nation.

Some have secured their independence from the British Empire through armed struggle; others mass civil disobedience and others still via elections of parties committed to independence from Britain. Of the 63 nations who became independent from the UK since 1939 none have regretted it and sought to reverse the decision.

2014 Referendum Was Democratic Expression of Opinion at That Time

The 2014 Independence Referendum was certainly a first class exercise in engagement with the populace and the 84.6% turnout was the largest in British history. It was a clear demonstration of Scottish opinion at that time. After a twelve month campaign of intense debates, discussions and decisive distortions by the Better Together ‘Project Fear’ campaign 55% of Scots said NO to independence.

However, democracy is a living process not a one-off event. Otherwise why would we hold regular 4 or 5 year elections for Parliaments and local councils? People are permitted to change their minds. That’s what democracy supports and protects.

Support for independence rose in the course of the campaign from between 23%/25% to an incredible 45% despite the might of the British State and its puppets in the mainstream media doing all in their power to frighten the electorate and try to convince them that Scotland was not sustainable as an independent nation, ignoring the reality that Scotland was an independent country for a longer period than it has been part of Britain.

Unionist supporters will cry ‘sour grapes’ at me highlighting the list of lies, distortions and unfavourable coverage given to the YES side in 2013/14 but they can’t deny one of the big issues promoted by the NO vote campaign was that membership of the EU could only be guaranteed by rejecting independence.

Not only does that particular point lie now in tatters but more significantly for the future of democracy is recognition of the fact that since the 2014 Referendum there has been not one, two or three general elections but four general elections, three UK wide and one Scottish in 2016, and in every single one of those elections the party of independence won.

A majority of independence supporting MPs has been elected to represent Scotland in 2015, 2017 and 2019. The 2016 Scottish Parliament election was also won by a majority of independence supporting MSPs. Since 2016 the SNP stood on a clear IndyRef2 manifesto commitment. They won in 2016, 2017 and 2019 on that specific commitment.

Boris Johnson Rejects Sturgeon's Request for Scottish Independence Referendum Powers
Indeed the Tory clarion call to voters in Scotland last month was specific and clear. Vote Tory to block IndyRef2. They lost over half their 13 MPs and saw their vote fall by 3.5% points. When approaching her speech on Friday the elected First Minister of Scotland should reflect that under the previous SNP independence route strategy they would have secured the right to enter “immediate independence negotiations with the UK Government” on three separate occasions since 2014. Now is not the time for being meek and mild mannered.

SNP Westminster leader, Iain Blackford, has already accurately called out Boris Johnson as a  ‘Democracy Denier’. There is not a snowball’s chance in hell that Johnson will agree to a Section 30 Order like 2012 which paved the way for a referendum Westminster was committed to recognise in 2014. Cameron only agreed at the time because he was in a weak position, relying on a coalition government and facing opinion polls that suggested the chance of a YES vote was so remote that it could be virtually ruled out.

Johnson is in an entirely different position. He sits with a stronger hand in Westminster with an 80 seat Tory majority and a recognition that with polls showing support for independence at least 50% he simply can’t afford the gamble. England needs Scotland’s economic prowess to survive. Contrary to the unionist lies Scotland has subsidised England for several decades now and anyone with a morsel of brain matter will realise that salient fact. If Scotland was truly an economic drain on England, a ‘subsidy junkie’ as we are often disparagingly labelled, the Tories would have cut us out of the glorious union long before now.

Nicola must rise to the challenge on Wednesday and deliver the manifesto commitment she won the general election on. The mandate for IndyRef2 was won in 2016, voted for by the Scottish Parliament and then re-won in 2017 and 2019. It is a quadruple backed mandate and Westminster’s vote for the Brexit withdrawal Bill last week despite being rejected by all three devolved parliaments in Wales, Northern Ireland and Scotland is the ‘material change’ which simply must trigger the use of that mandate.

Rise to the Challenge Nicola

Nicola’s task on Wednesday is to define without doubt our status as a nation not a colonised adjunct of England. We need no permission to hold a consultative referendum on our constitutional future. We don’t seek permission from our colonial masters we inform them politely and firmly that September this year will see IndyRef2 and in doing so she will articulate the view of at least 61% of Scots according to the latest opinion poll which confirms the overwhelming belief that calling IndyRef2 is a matter for the Scottish Parliament not Westminster.

This latest poll is no surprise. Remember the 45% who voted SNP last month did so on the explicit understanding that the SNP intended to organise IndyRef2 but the 18% who voted Labour also did so with declared support for Scotland’s right to decide.

Tory Denial of Democracy Demands SNP Action – IndyRef2 Must Be Called
Our task in the independence movement between now and September will be to engage every village, town, city and community in the logical, democratic and unassailable case for independence. Turnout will be critical. The Tory unionists and others will likely boycott it. We need to counter that cynicism and cowardice with energy, confidence and enthusiasm. We can push the turnout up to near the 60% mark and win at least 60-65% of those votes. No one questions the legitimacy of the Scottish Parliament to govern and pass laws yet the turnout in 2016 was only 55.6% and that was 5% higher than 2011.

Inertia is fatal in politics. Failure to use the mandate they asked for and received from the people of Scotland will not only undermine future SNP support, it will undermine the independence cause and the already challenged belief in democracy. Listen to your heart Nicola, listen to the democratic expressions of the Scottish people at each of the last four general elections, listen to the democratic vote of the Scottish Parliament in 2017 and name the date for IndyRef2 on Wednesday. Do the right thing and show the world we are about to become an independent nation once again.