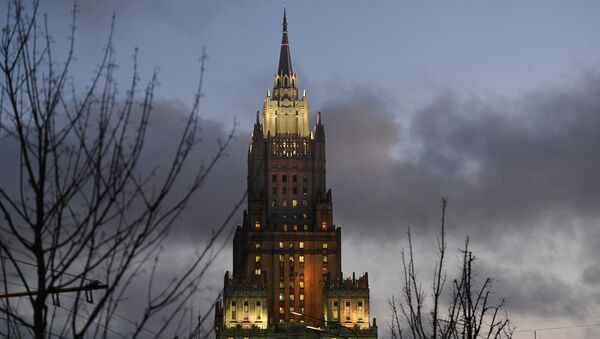 MOSCOW (Sputnik) - The leaders of the European Union and the United States have been silent on the contribution of Soviet Red Army soldiers to the liberation of the Auschwitz-Birkenau concentration camp, the Russian Foreign Ministry said in a Facebook post, adding that Western officials have a double standard.

The Russian Foreign Ministry made specific reference to a joint statement released on Thursday by European Council President Charles Michel, European Commission President Ursula von der Leyen and President of the European Parliament David Sassoli. The EU leaders dedicated their statement to commemorating the 75th anniversary of the Auschwitz-Birkenau extermination camp, which took place on Monday, but failed to mention the Soviet Union’s role in liberating the camp.

"The issued statement overshadows, once again, historical realities that are not very convenient for the EU. The first lines of the statement note that 75 years ago the Auschwitz concentration camp was liberated by some ‘allied forces,’ putting an end to the systematic extermination of Jews in Europe. Those ‘allied forces’ included Soviet soldiers. However, this inept attempt by the EU leadership to evade their direct mention can hardly be called random. After all it was the Soviet soldiers who liberated the prisoners of Auschwitz," the Foreign Ministry stated.

The ministry went on to say that the EU had a double standard when it came to commemorating the victims of Nazi German atrocities in the Second World War.

"Thus, individual representatives of Western states once again display a double standard when they talk about the need to remember those who fell victim to the Nazi regime, and those who gave their lives so that such tragedies will never happen again in the history of mankind," the ministry added.

The Russian Foreign Ministry also pointed out that US Vice President Mike Pence spoke in a similar vein during a speech at the World Holocaust Forum at Yad Vashem in Jerusalem on Thursday. Pence stressed that it was "allied forces" and not Soviet soldiers who were responsible for liberating prisoners of the Nazi German concentration camp system, thus ignoring the Red Army's contribution, the ministry stated.

On Monday, in the Polish town of Oswiecim, 200 former inmates and numerous foreign dignitaries attended a ceremony commemorating the 75th anniversary of the liberation of the Auschwitz-Birkenau camp by Soviet Red Army troops.

The Auschwitz-Birkenau facility was Nazi Germany’s largest death camp and has since became a symbol of the Holocaust. Approximately 1.4 million people — including 1.1 million Jews — were exterminated at the camp between 1941 and 1945, before it was liberated by the Red Army on January 27, 1945.

As a result, the United Nations General Assembly has designated 27 January as International Holocaust Remembrance Day.