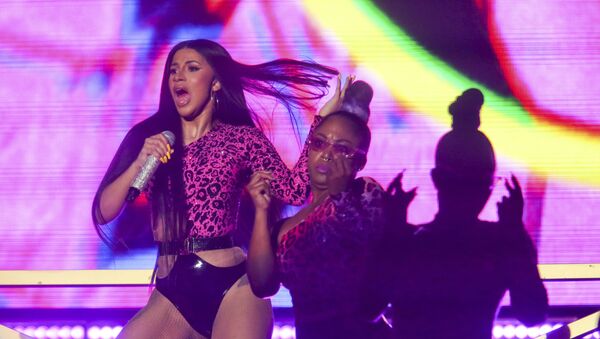 © AP Photo / Jack Plunkett
Subscribe
The winner of a 2018 Grammy Award for Best Rap album is no stranger to wowing the public with her looks, but it seems that this time the artist has outdone herself as she put on an eye-popping display when she appeared on the red carpet.

Rapper Cardi B left very little to the imagination when she appeared in a stunning open dress at the 2020 Pre-Grammys gala. The musician appeared on the red carpet together with her husband, rapper Offset. As the couple posed for photos Offset, who is nominated for best rap performance, noticed that his spouse was nearly flashing her bosom and decided to “save” her by grabbing one of her breasts.

The rapper even joked about her wardrobe malfunction in an Instagram post. “Babe, my titties keep poppin up”, read a caption to the photo showing the couple.

Apparently Cardi B did not wish to stop there, as she jumped into a gorgeous champagne dress adorned with crystals at the actual Grammys. The beautiful gown from Mugler featured sheer material that clung to the rapper’s opulent curves.

Cardi B wasn’t the only one who made eyes flash and heads turn. Trust us, it's useless to have red carpets if  singer and actor Billy Porter doesn't appear at them. This time the 50-year-old, who likes to shock the public appearing in female dresses at red carpets, appeared in a turquoise dress, glittering silver boots and a hat, featuring motorizsed curtains.

​Singer Ricky Rebel appeared in red leather pants, which bared his side. It seems that the one-time supporter of President Donald Trump no longer likes the president as he wrote “impeach this” on his buttocks, alluding to a statement made by Democrat Rashida Tlaib. The first Palestinian-American woman in Congress said “impeach this motherf***er” at an event in Washington DC.

​Meanwhile, singer and songwriter Joy Villa made it clear who she is voting for in the 2020 election. The 28-year-old appeared in a red dress with “Trump 2020” written on the front. The backside of the gown featured a caption “Impeached&re-elected”.