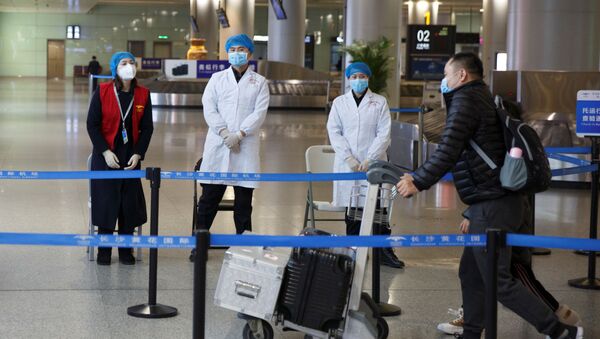 The World Health Organization (WHO) has altered the global risk degree of the deadly coronavirus outbreak from 'moderate' to 'high' as the total number of confirmed cases globally has reached 2,014, including 1,985 in China.

Ottawa on Monday updated its travel advisory, urging Canadians to "avoid all travel" to the Chinese province of Hubei, including "the cities of Wuhan, Huanggang and Ezhou" as a measure to stop the spread of the outbreak of a deadly coronavirus, dubbed 2019-nCoV.

#China: We have increased our risk level for the province of #Hubei. Avoid all travel to the province due to strict travel restrictions imposed to limit the spread of the novel #coronavirus. https://t.co/WSPt3wcQ76 pic.twitter.com/1zgfLpQurb

​The US Department of State updated its travel advisory earlier in the day, calling on Americans to reassess travel plans to China due to the coronavirus outbreak.

On Monday, the Chinese internet portal of medical information, Dingxiangyuan, said that the number of infected people had risen to 2,840. Chinese media have reported on 80 lethal cases.

Located in the central Chinese province of Hubei, the city first reported an outbreak of a previously unknown strain of a pneumonia-like disease in late December 2019. Last week, Wuhan and two other cities — Huanggang and Ezhou — were completely quarantined, with people prohibited from leaving or entering.

The current 2019-nCoV coronavirus outbreak is reportedly believed to have kicked off at a Wuhan seafood market.