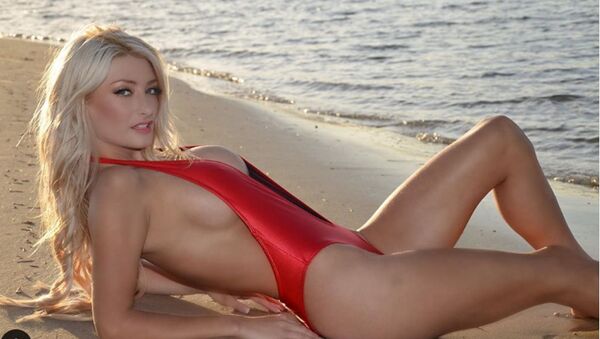 © Blogger photo /heathermccartney/screenshot
Subscribe
Heather McCartney was arrested shortly after her naughty stunt and spent the night in a police cell. The voluptuous model, who has more than 300,000 followers on her Instagram account, was fined $300.

Scottish model Heather McCartney has revealed the reason why she stripped naked during the 2014 AFL Grand Final. The 31-year-old revealed that at the time, she was suffering from aplastic anaemia, a deadly autoimmune disease and the stunt was on her bucket list. “Six months prior to that, I had just been told I had a couple of weeks to live. It was a bucket list thing, spur of the moment”, the model told the Daily Mail Australia.

Later, McCartney underwent marrow/stem cell treatment and went into remission. This was not the only good news for the model, as later she found out that she was expecting a baby.
Now, the 31-year-old, who is originally from Scotland but lives in Australia, revealed that she would strip naked again if her native country gains independence from the United Kingdom.

The model also opened up about the difficulties she faced while undergoing reconstructive surgery on her nose. In 2018, McCartney suffered a terrible injury to her nose, which she accused her husband of and filed a lawsuit against him. The court found him not guilty. The model filed a lawsuit against her spouse, but the court found him not guilty. The injury was so bad that surgeons in Australia refused to work on it.

Finally, the model found a doctor in Istanbul who managed to reconstruct her nose using cartilage from her rib cage. The young woman revealed that she will undergo two more operations in order to treat the injuries that she sustained during the alleged assault – realigning her jaw and dental work.