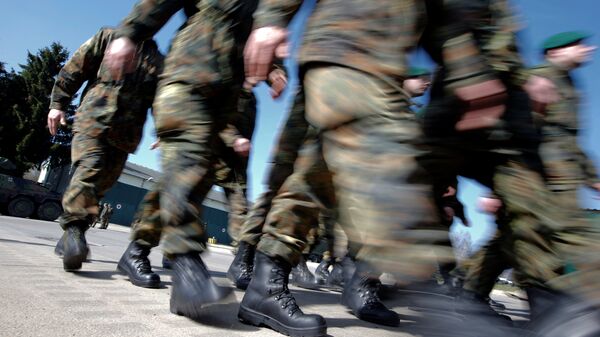 The head of the Military Counterintelligence Service (MAD), Christof Gramm, has revealed to the German outlet Welt am Sonntag that his office has seen a sharp increase in cases of staffers in the German Armed Forces, Bundeswehr, being suspected of right-wing extremism.

According to him, last year, 14 alleged extremists were exposed, including eight people who backed right-wing views. 40 more were found to have a "lack of constitutional loyalty”.

“The aim is to remove not only extremists but also people with a lack of constitutional loyalty from the Bundeswehr", the counterintelligence chief said, noting, however, that the rise might be explained by the fact that his service is taking a closer look at the issue.

One of the most debated cases is the one of soldier Franco A., who had allegedly planned to commit terrorist attacks against the German authorities and had registered as a Syrian refugee in order to shift the blame for the attacks onto immigrants. This case reportedly led the investigators to a "conspiracy network" that believed a government collapse was imminent and had prepared for a so-called "day X" in order to gather all the unwanted politicians "in one place with intent to kill them".

According to MAD, many extremism cases are linked to the Special Forces Command (KSK) – an elite group composed of select soldiers and who have been requested for NATO’s joint anti-terror operations.

"We are currently dealing with around 20 suspected cases of right-wing extremism in the KSK alone while at the beginning of 2019, there were half as many", Gramm said, adding that in terms of a percentage correlation, there are five times as many such cases in the KSK than in the rest of the Bundeswehr. At the same time, MAD insists that soldiers enjoy the same political freedom as civilians.

"Of course, a soldier can also choose, for example, to support Die Linke [the left-wing party]or the AfD [the right-wing Alternative for Germany party]. It's none of our business”, he noted.

MAD earlier had to fend off accusations of blunder following an investigation by a secret parliamentary control body in the German Bundestag (PKGr). The service initiated internal reforms promising to publish an official MAD report for the first time this year.

"We are interested - and I say this as a CDU member of parliament with absolute conviction - in a strong counterintelligence service as part of the security architecture", PKGr Chairman Armin Schuster (CDU) said, noting, however, that the committee’s work is not yet finished.

At the same time, the Free Democratic Party’s Marie-Agnes Strack-Zimmermann has called for a "transparent reporting system, which guarantees that the information from a soldier can be expressed unfiltered and directly" at the top "or get there". She emphasised that Bundeswehr members should not be put under general suspicion because of their right-wing activities.

The AfD’s Rüdiger Lucassen, who is in the Defence Committee, has warned against turning the search for soldiers who agitate against the liberal democratic order into a "large-scale mental test". He lamented that more and more people are talking about combating "right-wing sentiments" or "right-wing tendencies”.

He also criticised how soldiers were required to make page-length reports of what their comrades said in order to identify extremists.

“This is the worst source of information and will seriously damage the internal structure of the troops", he noted.

German Police Foil Plot in Army, Special Forces to Kill Politicians - Report
The Greens’ Agnieszka Brugger criticised the Ministry of Defence for “having taken far too long to recognise the problem with all seriousness and to take the necessary measures", while Die Linke’s André Hahn echoed her stance, saying: “For far too long, people haven't looked right or even looked away”. He claimed that the display of Nazi symbols and the playing of associated music have been downplayed.
Newsfeed
0
Access to the chat has been blocked for violating the rules . You will be able to participate again through:∞. If you do not agree with the blocking, please use the feedback form
The discussion is closed. You can participate in the discussion within 24 hours after the publication of the article.
To participate in the discussion
log in or register
loader
Chats
Заголовок открываемого материала