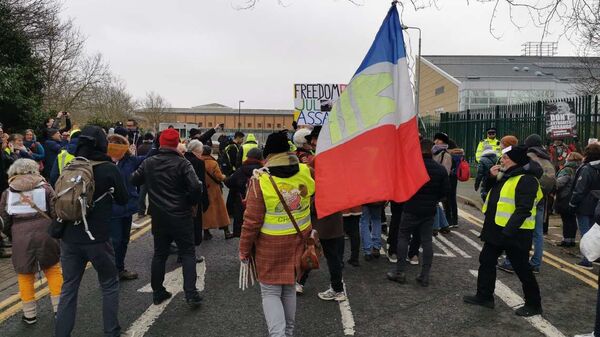 The rally, which took place outside of one of the UK's largest high-security prisons outside London, saw hundreds of protesters from across Europe and beyond speak out against the Wikileaks founder's imprisonment and potential extradition to the United States.

Scores of protesters chanted slogans near the entrance to the compound, with many urging freedom for the detained activist and condemning his potential extradition to the United States.

The rally took place a day after Renata Avila, lawyer and member of Mr Assange's defence team, confirmed that the activist had been moved out of solitary confinement at the facility.

Yellow Vests Come From Across Europe, More Around the Globe Join In

A spokesperson for the Yellow Vests movement said that hundreds had travelled from across France, including Nice, Marseilles, Montpelier, France, Lille, and other cities, to join the rally.

Activists from Belgium and Berlin, Germany, had also attended, the spokesperson said, adding that several interviews and live feeds had taken place with supporters in Australia and Mexico.

"A lot of countries have organised for Julian, such as Belgium, Austria and Switzerland, San Francisco, Denver, Toronto... Everywhere in the world for Julian, with the head of the Yellow Vests movement arriving today", the spokesperson said. 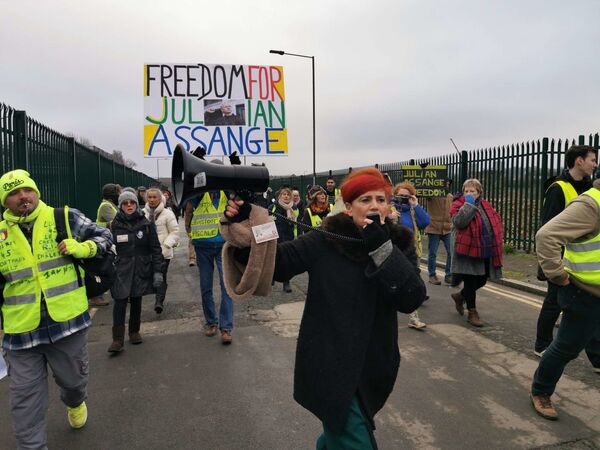 Yellow Vests Protesters Gather Outside Belmarsh Prison to Support Julian Assange
© Sputnik
When asked why it was important for movements such as the Yellow Vests to back Julian Assange, the spokesperson said that "if Julian goes down", the same could potentially happen for "democracy, egalitarianism and the truth".

She added: "That's why he is being persecuted, because he's a threat to those in charge of our countries. They're afraid of that, and they don't want Julian to be released.

It was very important for "true journalism and freedom of expression, media and the press", to speak up for Assange, which was the "beginning of many posibilities for us", the spokesperson concluded.

Committee to Defend Julian Assange Speaks Out Against Extradition Request

A spokeswoman from the Committe to Defend Julian Assange said that the rallies were special because of the Yellow Vests travelling "in large numbers all the way from France".

"They've shown people in this country and in Europe what it is to have a struggle", she said.

The Yellow Vests had "continuously" supported Mr Assange because his case was "absolutely critical for the defence of democratic rights", the spokeswoman added.

She said: "He is a journalist and publisher, and is being persecuted by the USA and the British government. He's in Belmarsh on no conviction whatsoever and is still just in there, awaiting extradition, with his case beginning in February.

She added that unless other journalists and parliamentarians "who have been entirely silent on his case" supported Julian Assange, it would be difficult to secure his freedom.

She said: "Even the United Nations [Working Group on Arbitrary Detention] said that he has been tortured, and they still haven't said anything. I think the British establishment and its supporters are a disgrace, and the people here today know what democracy is.

The spokeswoman concluded, stating that Assange's supporters would "fight as much as we can" to defend him, "secure his freedom and stop attacks on free speech and the free press".

UK authorities were granted permission in April last year by the Moreno administration in Ecuador to forcefully detain Mr Assange, with the activist later being sentenced to 50 weeks in jail for breaching bail conditions.

The US Department of Justice charged the Wikileaks founder under the 1917 Espionage, with Assange potentially facing up to 175 years in prison for publishing classified documents exposing war crimes during the US invasions and occupations of Iraq and Afghanistan.

Hearings on whether to extradite the Australian journalist to the US were also divided at Westminster Magistrates' Court in London, with one set to take place on 24 February and a second on 18 May.