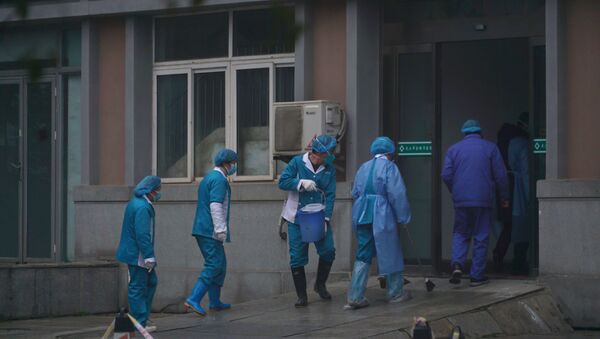 An outbreak of a previously unknown pneumonia, later identified as a new strain of coronavirus, originated in the Chinese city of Wuhan in late December and has since then spread to several countries.

The Chinese National Health Commission has confirmed a total of 830 coronavirus cases and 25 deaths from the new virus, CCTV News reported on Friday.

"As of 24:00 on 23 January, the National Health Commission has received a total of 830 confirmed cases of new coronavirus infection in 29 provinces (autonomous regions and municipalities), including 177 severe cases and 25 deaths, including 24 cases in Hubei Province and one case in Hebei Province", the statement says.

More than 8,000 people are now under medical observation.

The Chinese authorities earlier reported over 600 cases and at least 17 deaths resulting from the new respiratory infection that was first registered in the Chinese city of Wuhan and labelled 2019-nCoV or Novel Coronavirus by the World Health Organisation (WHO).

Those infected showed symptoms of pneumonia and other acute respiratory diseases.

Concerns over the virus have increased worldwide, as cases of the Wuhan coronavirus have already been registered in Hong Kong, Macau, Taiwan, Thailand, South Korea, Japan, and the United States. As part of their safety measures, airports around the world are now monitoring incoming passengers for the disease.

In Wuhan, authorities have temporarily banned residents from leaving the city. They have also introduced restrictions on public transport.

🇨🇳 What is going on in #Wuhan, the center of the virus breakout? Only a few pedestrians and vehicles could be seen in the central area. Local residents chose to stay at home and many have canceled the big family gatherings on the eve of #SpringFestival: GT reporters. #nCoV2019 pic.twitter.com/dLMHYxYeMD

The Wuhan virus belongs to the same family of coronaviruses that caused SARS (Severe Acute Respiratory Syndrome) and originated in China in 2002 resulting in the deaths of about 800 people all over the globe.

It is reported that Google searches for "virus masks" are growing fast, similar to when epidemics like SARS or Ebola were at their peak globally.

The WHO has said it is too early yet to declare an international public health emergency over the deadly coronavirus, "given its restrictive and binary nature".