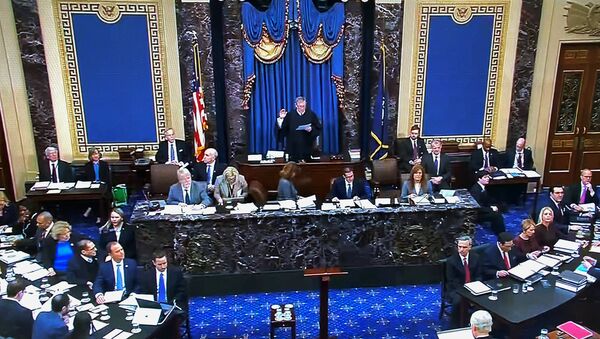 US lawmakers have been accused of negligence and disregard for the trial’s rules as some were spotted playing fidget spinners, doing crossword puzzles, and even napping. According to the rules, Senators must remain seated during the impeachment trial. But more than two dozen left their seats at various times.

The US Senate opened its session on Thursday for the second day of opening arguments in the impeachment trial of President Donald Trump in Washington DC. Here are some highlights of Day Three of the trial.

Adam Schiff, chief of the House Intelligence Committee and one of the seven impeachment managers, adopted a more conciliatory tone. He thanked Senators for their attention through the first days of the trial.

Impeachment manager Sylvia Garcia spent much of her time defending former Vice President Joe Biden and his son Hunter Biden. She praised the 2020 presidential contender for calls to sack Ukraine’s prosecutor Viktor Shokin in 2016, saying the Ukrainian official was corrupt and his removal actually increased the chances that Burisma, where Hunter Biden held a post, would be investigated for corruption.

Val Demings, Rep. D-Fla., spoke about the president’s decision to remove the Obama-era ambassador to Ukraine, claiming Trump sacked Yovanovitch out of fear that she would stop any investigations into the Bidens. “So, why did President Trump remove a distinguished career public servant? We know why. President Trump removed Ambassador Yovanovitch because she was in the way", Demings said

Fact Checking on Abuse of Power

Democrats spent most of their time speaking about Trump’s alleged abuse of power. Impeachment manager Jerry Nalder said: “All prior impeachment considered of high office have all included abuse of power”, he said, referring to impeachment investigations into Presidents Andrew Johnson, Richard Nixon, and Bill Clinton. Clinton’s impeachment vote featured only two articles – perjury and obstruction of justice.

American media outlets accused US lawmakers of acting like children as they were seen sleeping, playing with fidget spinners, and even doing physical exercises while opening arguments were read.