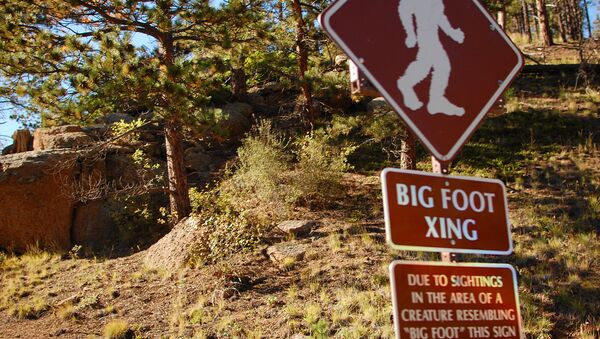 Bigfoot enthusiasts have turned their attention to Washington after the state’s Sherman Pass web camera spotted what appears to be the mythical beast taking a midday stroll through the snow.

The Washington State Department of Transportation (WSDOT) issued an alert via social media on Wednesday claiming the Cascade Range’s Sherman Pass recently had an unexpected guest wander through the area.

“Sasquatch spotted!!! I'm not superstitious... just a little stitious," the WSDOT East Twitter account said in its January 22 post. “If you look closely by the tree on the left there looks to be something... might be Sasquatch.”

Sasquatch spotted!!! I'm not superstitious... just a little stitious. Have you noticed something strange on our Sherman Pass/SR 20 webcam before? If you look closely by the tree on the left there looks to be something... might be Sasquatch... We will leave that up to you! pic.twitter.com/RaDGqQdEUF

Naturally, nonbelievers and Sasquatch search parties alike flocked to the account’s page to speculate on the Bigfoot.

I seen him/her not far from there last October. Picture is through my binoculars. Must be the same group of hominids. pic.twitter.com/QpdU3DleBT

Photoshop!!! Notice that more snow fell on the ground and roadway in each pic. Why is there is no snow on the all black “Sasquatch”? At least sprinkle some fake snow on his black fur next time.

They DO exist!!! #IBelieve

Just gonna wait for the story.. I would want photos near the tree of any footsteps.

We have the technology to take beautiful high resolution pictures and videos of planets far away, but can't seem to get clear pictures or videos of suspected Sasquatch siightings, here on planet Earth.

The WSDOT even pushed back against one nonbeliever who contended that the whole thing was a hoax.

I can confirm that it is not a shadow or the tree trunk... there is a story behind it...

After causing a ruckus on social media, WSDOT East updated its followers the next day and let them know that a follow-up search of the area turned up zilch.

However, the Twitter account for the I-90 Snoqualmie Pass, located west of the Sherman pass, produced video footage on Thursday of a rather large, Bigfoot-esque creature trudging through the wildlife overcrossing on the interstate.

I think Bigfoot is making the rounds across our mountain passes. @wsdot_east showed him on Sherman Pass the other day and now he is on the wildlife overcrossing on I-90 just east of Snoqualmie Pass. #doyoubelieve pic.twitter.com/gysrH5wG2r

Though many netizens do not appear too convinced by the alleged Sasquatch spotting in Washington, this is not the first Bigfoot sighting to occur in the US as of late. Just last month, Sputnik reported that a team of experts in Washington’s bordering state of Oregon researched Sasquatch footprints and used thermal cameras to search for the mythical beast.

Mireya Mayor, a primatologist at Florida International University, concluded that the idea that a Bigfoot-like primate may be located in the region "is totally within the realm of possibility."