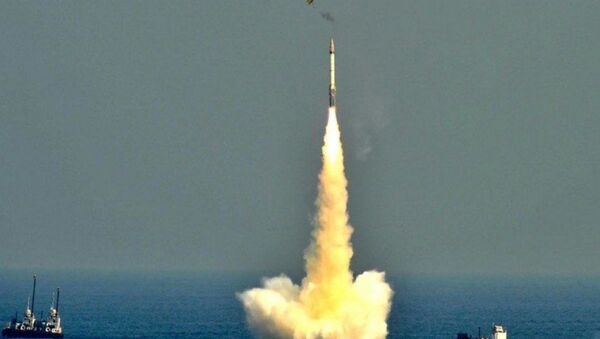 New Delhi (Sputnik): Nuclear capable K-4 missiles have so far been successfully tested four times from underwater pontoons. India is the sixth nation in the world which has the capability to fire nuclear missiles from all three platforms – land, undersea and air.

In a significant success, India’s Defence Research and Development Organisation (DRDO) has successfully conducted two back-to-back tests of its submarine-launched ballistic K-4 missile in the Bay of Bengal. The successful tests of the missiles, with a range of around 3,500 kilometres, have paved the way for their serial production and induction into the Indian Navy.

A defence official said that it was the last developmental trial from an underwater platform off Vizag coast. “The missile successfully fired for a reduced range,” he added.

India has joined the elite club of nations, namely the US, Russia, UK, France and China, which have the capabilities to launch nuclear missiles from the sea, air and undersea platforms. The DRDO had received a major setback in December 2017 after the test had not succeeded due to a battery failure.

India has also developed shorter range (700km) submarine-launched missiles which are positioned to counter threats from Pakistan, including the Karachi base. The other missiles, called BO-5s, have firing ranges of over 700 kilometres.