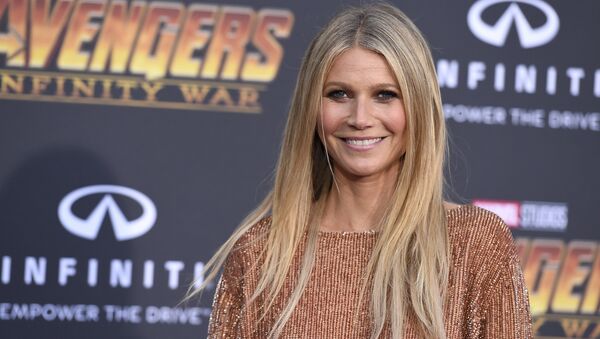 The Avengers and Iron Man star doesn’t only know how to turn heads with her charm and hit box office roles, but she also has a flair for naming – and even branding.

The other day, actress-turned-wellness ambassador and entrepreneur Gwyneth Paltrow sat down with Seth Meyers on his late night programme to promote a Netflix series dedicated to her controversial brand Goop, which is understood to be catering to rich people’s health concerns.

It hardly came as a surprise when the Marvel Cinematic Universe’s A-lister was asked about juice cleanses and staffers’ purported trips to Jamaica to take mushrooms, as well as last – but not least – the idea behind a $75 vagina candle that is listed among Paltrow’s Goop goods currently on offer.

“Well, it’s a candle. It’s called 'This Smells Like My Vagina'. So it sort of started as a joke", Paltrow started off telling the story of how the wording came to her mind:

“I was with the nose, Douglas Little, for his brand Heretic, and we were kind of messing around. And I smelled this beautiful thing, and I was like this smells like my vagina", the actress explained, then going to and fro, speculating about whether they were high at the time and offering a vivid description of what it felt like:

Paltrow’s six-part Netflix docu series is set to stream on 24 January and onward. The production focuses on the Oscar-winning actress’ lifestyle brand, which has been the subject of stringent scrutiny over the past few years.

Goop first gained notoriety in 2015, when it encouraged women to “steam clean” their vaginas and just recently, it was heavily fined ($145,000) over claims that their vagina jade eggs are capable of “balancing hormones and regulating menstrual cycles…and increasing bladder control” (apparently the urinary one).

However, there is some hope that not all will blindly trust the super-mighty devices: health professionals have long voiced alarm (as soon as the docu’s promotional trailer was released) that the show, set to explore "dangerous" and "unregulated" practices, may well spread pseudoscientific data.