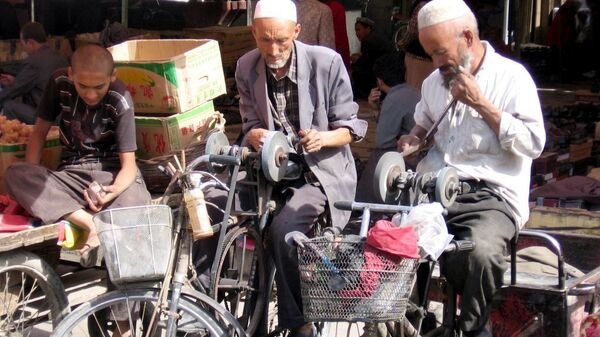 Many Western media outlets, including The New York Times, have released reports since the end of December 2019 claiming that the Xinjiang regional government is forcing ethnic groups, especially the Uygurs, to work in factories.

"Those who said we as an ethnic group are ‘forced’ to work belittle us, since they think of us Uygur people as a lazy people. We are working as hard as others and want to have a better life," Mehmut Metkasen, a young Uygur man said.

Global Times reporters interviewed many people in Northwest China’s Xinjiang Uygur Autonomous Region, asking whether they have been forced to work and their opinions on these Western media reports.

Mehmut, 23, is from Aksu Prefecture in Xinjiang. After graduating from a secondary vocational school, he remained jobless for a few years. In March 2018, he began to work for an agricultural products factory.

After working in the factory for six months, Mehmut was transferred to a plant that processes agricultural products where he learned to operate different machines.

"The company offers free accommodation for us. I can earn more than 2,650 yuan a month after paying all the insurance. Our company also organizes different activities for the holidays. Life here is quite comfortable," Mehmut told the Global Times.

Mehmut said his wife also plans to work in the factory in March, as their parents can help take care of their son.

"We will earn about 4,600 yuan a month at that time and save 3,000 yuan to 4,000 yuan a month since the company offers free accommodation. We want to save money for our son’s college tuition," Mehmut said.

When being asked about whether they are forced to work in the factory, as some Western media sources have alleged, Mehmut asked, “Why do some people think they need to be forced to go to work?"

"We Uygurs also want to have a better life through our hard work," he told the Global Times.

Kawul Yasen, a 24-year-old man working in the same factory, also shared his willingness to work hard in the factory to earn money and support his parents.

Echoing Mehmut’s sentiments, Kawul said he thinks people who said they are forced to work in factory actually “belittle” Uygurs.

"We used to have little access to work outside of the farmland due to limited education. We now have the chance to have more employment options, which is more than good," Kawul said.

Memet Niyaz, who works in the same factory with Mehmut, said one of his happiest moments was buying a car in 2019. Memet said his family is living a better life.

Before working in the factory, Memet was a farmer. When he started to work in the factory in 2016, he rode a bicycle to work every day due to a lack of money.

"It is better to be a worker in the factory than to be a farmer. Before working in the factory, I worked in the farm for a whole year but still could not have a stable income. But now, I work in the factory to earn money every month and can have my endowment insurance," Memet said.

Aside from working in the factory, Memet also manages his fruit yard. He can earn 30,000 yuan to 40,000 yuan a year. Thanks to the increasing income, Memet rebuilt his house and improved its decorations in 2019.

"My two children are very happy to live in a new house. I want to work hard in the factory to save more money and buy a house in the city," he told the Global Times.