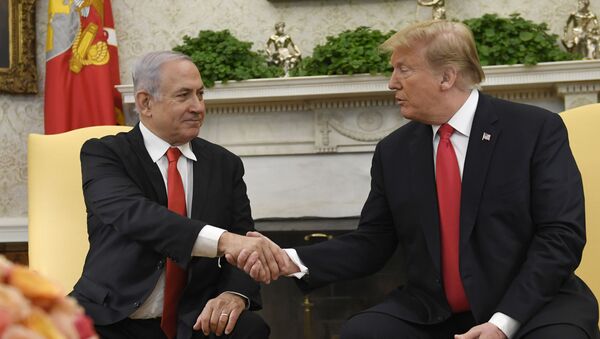 Israeli Prime Minister Benjamin Netanyahu is expected to fly to Washington next week upon Trump's invitation, amid speculations in the Israeli media that the peace plan for the Middle East region could be released within the next 24 hours.

US President Donald Trump said on Thursday that the reports about the timing of his administration releasing the Middle East peace plan "are purely speculative".

"Reports about the details and timing of our closely-held peace plan are purely speculative", Trump said via Twitter.

On Tuesday, the US President will meet Israeli PM Benjamin Netanyahu and the leader of the opposition Blue and White party Benny Gantz to discuss shared US and Israeli regional and national security interests. Trump said he looks forward to meeting with both Israeli leaders next week.

The United States looks forward to welcoming Prime Minister @Netanyahu & Blue & White Chairman @Gantzbe to the @WhiteHouse next week. Reports about details and timing of our closely-held peace plan are purely speculative.

There have been speculations that Washington would offer a plan that would provide Israel's sovereignty over all West Bank Israeli settlements save 15, according to Israel's Haaretz newspaper.

As of today, the Israeli government, along with a whole array of other countries such as France, the US, the UK, and Germany, refuses to recognise the Palestinian National Authority as an independent political and diplomatic entity, going ahead with the construction of settlements in the occupied areas despite objections from the United Nations.

Last year, the Trump administration also sparked criticism worldwide by recognising Tel Aviv's claims to the Golan Heights on 25 March 2019, which the country has controlled since capturing it from Syria in the 1967 Six-Day War. The US also recognised Jerusalem as the Jewish state's capital back in 2018.