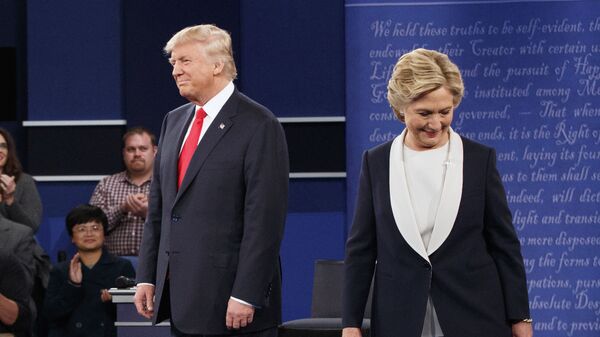 Oleg Burunov
All materialsWrite to the author
On Wednesday, Hillary Clinton moved to tone down her adverse rhetoric against 2020 Democratic presidential hopeful Bernie Sanders, tweeting that as retiring Trump remains the number one priority for the US and beyond, she will do her best to “support our nominee”.

US President Donald Trump has made fun of Hillary Clinton’s recent remarks that she still believes “nobody likes” Bernie Sanders.

“When Hillary says nobody likes him, nobody likes her. That’s why she lost, nobody liked her. She had every advantage. She had this big machine behind her […] and it wasn’t even close,”  Trump told Fox Business Network on Wednesday, referring to Sanders, Clinton’s rival in the 2016 Democratic presidential primary and 2020 White House hopeful.

“She’s the one that people don’t like. If I had my choice in terms of personality, I might take him over her. But I probably would take neither,” Trump added.

Netizens, meanwhile, remained at loggerheads over the remarks, with some claiming POTUS is ‘not wrong’.

Others, however, refused to share Trump’s view, with one user tweeting, “Pot calling the kettle black”.

Trump spoke after Clinton confirmed during an interview with The Hollywood Reporter that still thinks that Sanders is unlikable.

Shortly after the interview was released, Clinton went on Twitter to retract on her words and noting that “the number one priority for our country and world is retiring Trump”, which is why “I will do whatever I can to support our nominee”.

Earlier, she apparently sparked confusion when speaking about remarks about Sanders in the documentary Hillary, due to be released

“He was in Congress for years. He had one senator support him. Nobody likes him. Nobody wants to work with him. He got nothing done. He was a career politician. It's all just baloney, and I feel so bad that people got sucked into it,” Clinton said in the film.

Sanders, who was Hillary Clinton’s former leading rival, formally endorsed her on 12 July 2016 and agreed to campaign for her in the Democrats' battle against Trump. Clinton, for her part, accused Sanders of hurting her 2016 campaign.

The Sanders and Clinton camps reportedly clashed over who would speak at his pro-Clinton campaign rallies, with Sanders seeking to see his supporters there and blocking those who supported Clinton.

In early March 2019, Sanders announced that he is launching a second presidential bid, seeking victory in 2020 “from the very beginning”.