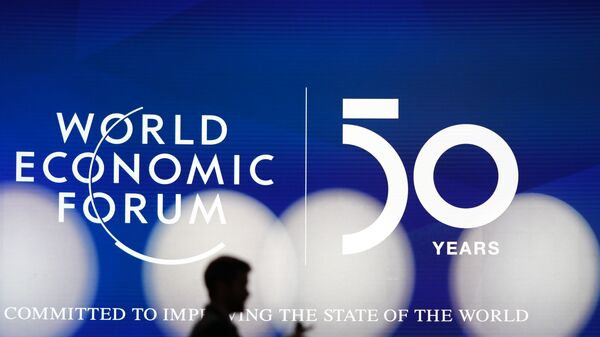 Denis Bolotsky
All materialsWrite to the author
As many heads of state skipped WEF-2020, most discussions focused on business and the economy. But Wednesday’s panel meeting on Russia turned into a heated debate, with its participants arguing about bias and outdated stereotypes.

Relations between Moscow and the West dominated the agenda at the “Strategic Outlook on Russia” – a World Economic Forum panel discussion, which also focused on the state of the country’s economy, politics and business climate.

Russia was represented by Maksim Oreshkin, who was replaced as the country’s Minister of Economic Development on Monday, but chose to take part in Davos discussions, and Kirill Dmitriev – CEO of Russian Direct Investment Fund (RDIF).

Among other participants were Paula Dobriansky – a US expert on the former USSR and Eastern Europe, and Jonathan Tepperman – the Editor in Chief of Foreign Policy magazine, who moderated the discussion.

It seems that it’s hard for some western journalists to hear positive news from Russia: once Maksim Oreshkin presented recent Russian economy growth figures, the moderator claimed he’s “painting a very rosy picture of the economy” and quickly changed the subject to corruption.

Even though Russian panellists were at first given a chance to talk about Russia’s investment climate and the country’s economic growth, things got heated rather quickly, as these positive messages were met by other speakers with a certain degree of scepticism.

Paula Dobriansky, who admitted that she’s not an expert on economy, referred to views on Rus.economy by Anders Aslund–a Senior Fellow at Atlantic Council. Aslund is known for his anti-Putin stance, calls to kick Russia out of G8, authored cruel reforms during Yeltsin years in RU.

When Oreshkin asked Dobriansky whether she herself had been to Russia recently, she said that she hadn’t, but she’s “siding those who were in Russia and those who actually follow economic trends.”

Dobriansky was rather straightforward when she admitted that she wants to “balance the conversation” with Russian panellists so it wouldn’t look “rosy”:

“I’m not going to say that some of the data that you provided – there have been areas where there has been some progress, but my point is trying to balance this conversation, that it’s not “rosy” as our moderator said, that there are some serious issues that haven’t been tackled.”

William Browder, the CEO of Hermitage Capital, was another person who apparently tried to make the conversation “less rosy” by slamming Russia’s judicial and law enforcement systems. Browder, who is wanted in Russia for tax crimes, travels to Davos every year and confronts Russian government officials. This time he mentioned the case of Michael Calvey – a US investor who’s currently under house arrest in Moscow.

Kirill Dmitriev responded to Browder by pointing out that RDIF supported Calvey’s Baring Vostok fund from the very beginning:

“We believe they are the best investor in Russia, I personally vouched for Mr.Calvey, we co-invested with Baring Vostok and today I actually announced what we are opened to be one of the Limited Partners in their future fund with some of our partners. So Russia consists of different views, different opinions and it really needs to be supported and not just put in this very negative narrative box of no hope.”

Dmitriev referred to the works of another WEF-2020 participant – Professor Robert Shiller, who studied the dynamics of popular narratives, and described their impact on economics.

The RDIF CEO added that Russia often falls victim to negative narratives, fueled by many factors ranging from the fear of Russian aggression in Eastern European countries to the unwillingness of the West to recognize Moscow’s growing geopolitical power.

“We have achieved great geopolitical successes, we have good macroeconomy, we have some good results that many American friends don't know - such as that our stock market grew 55% last year, our foreign direct investment doubled last year. But definitely, I agree with you that there are lots needs to happen: modernization, reforms, making sure growth happens - and this is where the efforts should be. And this is where new government and lots of young people will take Russia forward."

RDIF is Russia’s sovereign wealth fund, established to make equity co-investments, primarily in Russia, alongside international strategic and financial investors. The fund’s agenda in Davos includes over 30 meetings with international partners, and announcements such as the fund’s plans to launch a new electronic payment system in 2020 in partnership with China’s Alibaba and several Russian tech companies.

This year’s World Economic Forum is being held in the Swiss Alpine resort of Davos from January 21-24.