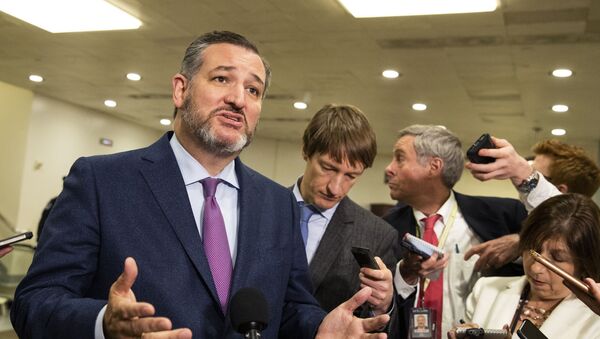 According to the Texas senator, Democrats, namely Adam Schiff and Jerry Nadler, are just "banging the table", since they actually lack the evidence to impeach President Trump.

Ted Cruz has blasted House Democrats for "banging the table" in the ongoing impeachment trial against President Donald Trump.

On Tuesday, the US Senate, dominated by the Republicans, voted down 53-47 all the bids by Senate Democratic Leader Chuck Schumer for new evidence and new witnesses to be subpoenaed in the impeachment trial. Republican majority leader Mitch McConnell earlier drafted a resolution that blocked Democrats' attempts to subpoena more witnesses and documents.

Ted Cruz is among the most outspoken members of the Republican Party who strongly oppose the Democrats' bid to impeach the POTUS. He has also called for former Vice President Biden to testify in the impeachment trial, insisting there is considerable evidence of corruption crimes concerning his son Hunter Biden at the time he was on the board of Ukraine's Burisma gas company.

.@tedcruz: “The need for the Senate to hear the testimony of Hunter Biden has become more relevant.” pic.twitter.com/OhhKBYPHu6

​On 19 December, the House of Representatives voted to impeach Trump for abuse of power and obstruction of Congress.

An impeachment inquiry was launched against Trump back in September over a whistleblower complaint who alleged that the POTUS "put pressure" on his Ukrainian counterpart Volodymyr Zelensky to investigate into potential corrupt dealings involving Joe Biden and his son in Ukraine.