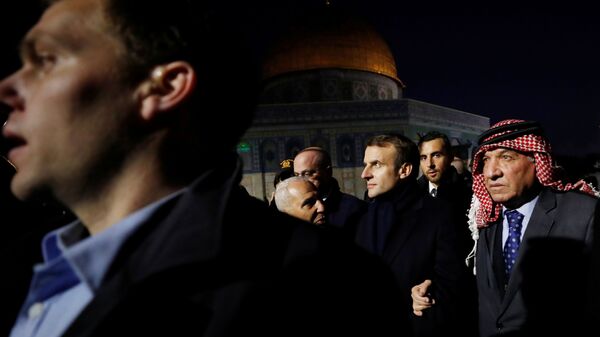 Ilya Tsukanov
All materialsWrite to the author
After arriving in Jerusalem on Wednesday to attend a Holocaust commemoration event, the French president got into a shouting match with Israeli security personnel accompanying him on a tour of the Old City over an apparent diplomatic faux pas.

On Thursday, France denied President Emmanuel Macron issued an “apology” to Israeli police, contradicting a police statement that the president had apologised for shouting at officers at the entrance to the French government-administered Church of Saint Anne.

“There was no presidential apology to the Israeli security forces,” unnamed officials from Elysee Palace told Haaretz.

Officials clarified that Wednesday’s incident, which saw Macron jumping to the defence of French security officers and yelling at the contingent of Israeli bodyguards assigned to protect him, was based on long-established diplomatic rules.

“St. Anne is a French national domain in Jerusalem. It is the role of France in this city to protect these places. The Israeli security forces wanted to enter it while security was provided by French security. The president reacted to an altercation between the Israeli and French security forces at the time of entering St. Anne in order to end it and to recall the rules that apply,” the officials explained. They added that the incident was “nothing serious.”

Israeli police earlier released a statement claiming that Macron had “apologised about the incident,” and “shook hands with the security personnel.”

Macron’s shouting match with Israeli police went viral after part of the altercation was captured on video by a French journalist. In it, a visibly agitated Macron can be heard demanding that his Israeli entourage “go outside,” calling on them to “respect the rules” which he said had been in place “for centuries.”

Tweet reads: #Macron gets angry with Israeli police in Jerusalem. In the footsteps of Chirac in 1996.

The incident took place at the Church of Saint Anne, an ancient medieval-era Catholic Church presented to French King Napoleon III by Ottoman Sultan Abdulmejid I in 1856. Macron is at least the second president to have gotten into an altercation with Israeli security forces during an official visit to Jerusalem. In 1996, President Jacques Chirac threatened to get on his plane and go back to Paris after Israeli police pressed him to move on from the ancient church.

Macron met with Israeli Prime Minister Benjamin Netanyahu on Wednesday, and is taking part in the Fifth World Holocaust Forum.