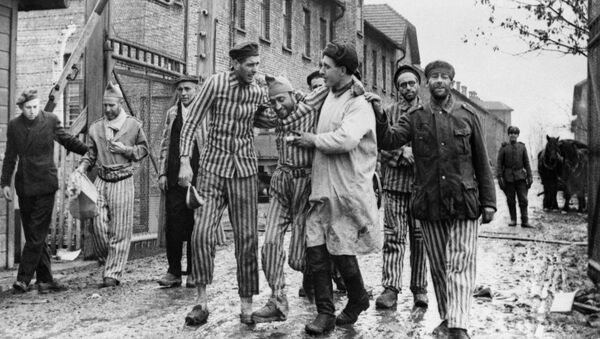 Egor Efimchik
All materials
Nazi Germany carried out its human eradication programme on an industrial scale, inspired by Hitler’s wicked views about race and people. That genocidal effort relied heavily on a net of extermination camps, responsible for the deaths of millions of people. Of those death factories, Auschwitz was the most “efficient”.

23 January 2020, Jerusalem. More than 45 heads of state and other politicians gather in the Holy City for the Fifth World Holocaust Forum. The event kicks off at Yad Vashem Memorial just days ahead of International Holocaust Remembrance Day, timed to coincide with the liberation of Auschwitz.

Speaking to Israeli Prime Minister Benjamin Netanyahu and President Rivlin on Thursday, Russian President Vladimir Putin called the Holocaust a “shared tragedy”. According to the most widely-cited estimate, 40 percent of Jews that died during World War II were from the Nazi-occupied parts of the Soviet Union (2.5 million out of the total 6 million victims of the Holocaust).

Auschwitz was at the centre of what came to be known as one of the most inhumane episodes in world history. It was created in 1940 in former army barracks at the confluence of the Vistula and Sola rivers in southern Poland.

People from all over Europe were carted into the camp in cattle wagons. Though most of them were Jews, Nazi ideology was also premised on the elimination of other “inferior” nations and groups – including Slavs. The Nazis viewed those nations as non-Aryan Untermenschen, or sub-humans, who were to be enslaved and wiped out.

This is why Nazi Germany viewed the war against the USSR as an ideological and racial conflict, unlike the warfare in Western Europe. 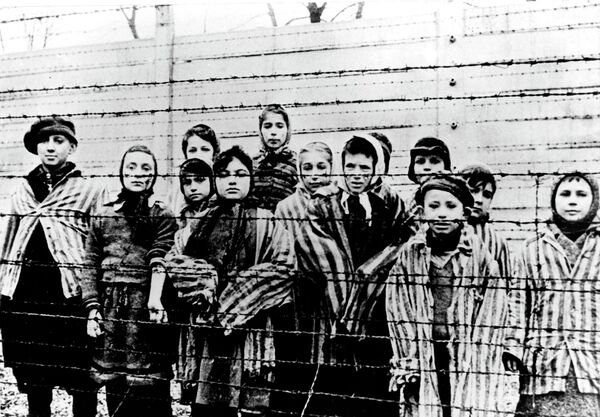 SS guards would cut prisoners’ hair off, tattoo ID numbers on their skin, and cram them into barracks where they would be left to struggle for survival in unhealthy and unbearable conditions.

Most died of extreme fatigue and starvation, others were killed in gas chambers, and still others were executed or beaten to death. Some were trapped in the hands of barbaric pseudo-scientists such as Joseph Mengele, aka the Angel of Death. Of the 1.3 million people sent to Auschwitz, 1.1 million never made it out alive.

January 1945, eastern Poland. Having ultimately turned the tide of war, the Red Army liberates most of Nazi-occupied Soviet territory and eastern Poland. In January 1945, Soviet troops launch a major operation, called the Vistula-Oder Offensive, to drive the German forces out of Poland and prepare the stepping stones for a follow-up offensive on Berlin.

The operation is a joint effort between Marshal Georgy Zhukov’s 1st Belorussian Front, which holds the sector around Warsaw, and Marshal Ivan Konev’s 1st Ukrainian Front, driving on Krakow to the south of the capital. Both fronts have over one million soldiers each. 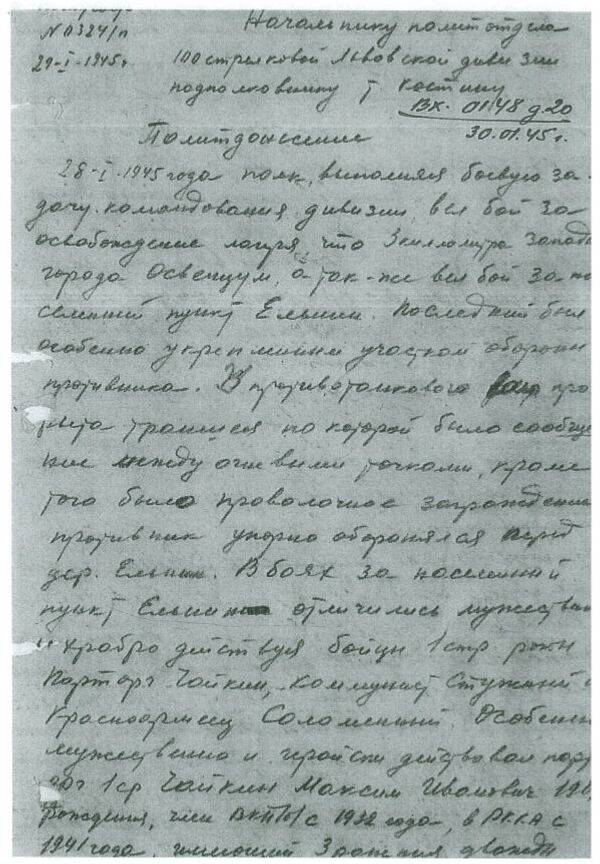 Fragment of a handwritten report from Auschwitz to the commander of the 100th Rifle Division, dated 29 January 1945, Russian military archives
© Photo : Archive

The situation is changing so rapidly that the massive offensive cannot go down in total accordance with the initial plan, and the commanders have to adjust on the spot. Documents from Soviet archives have shed some light on the details of that operation. 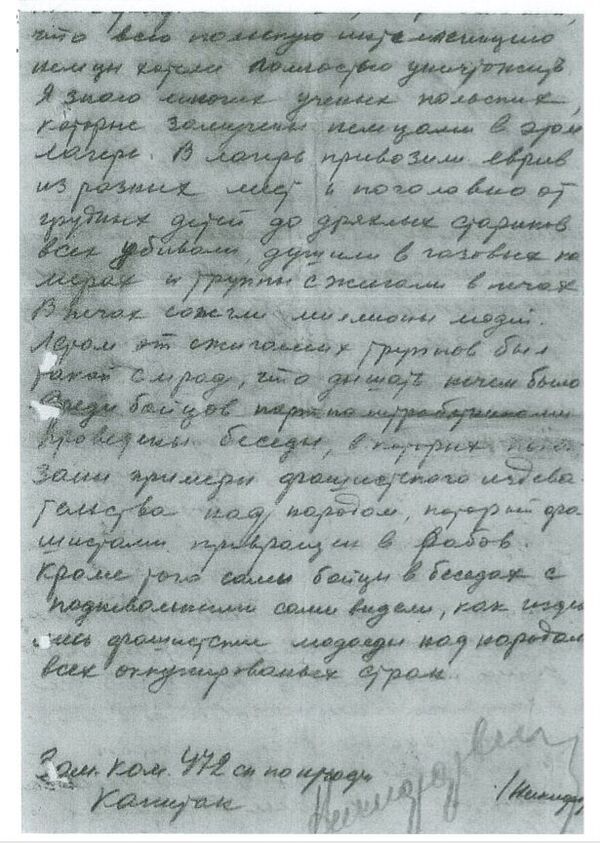 Fragment of a handwritten report from Auschwitz to the commander of the 100th Rifle Division, dated 29 January 1945, Russian military archives
© Photo : Archive

By 19 January 1945, Marshal Konev’s forces capture Krakow, clearing the way for further encroachment on Silesia, the Third Reich’s second most important industrial area and the location of Auschwitz.

Konev initially decides to encircle the Nazi contingent in Silesia using tank brigades. However, as the Soviet soldiers advance westwards, he understands that, if encircled, the Nazis will defend it to the last man. A battle in Silesia could inflict heavy losses on his troops and on local industry.

Konev then decides to let the enemies out of the trap because it would be easier to fight them in a field rather than in a densely-populated industrial area – a move that proved successful for the Soviet campaign and fateful for Auschwitz.

On 27 January 1945, soldiers from the 100th Rifle Division liberate the death camp. Soviet troops blow the gates of Auschwitz open at around 3 p.m. They walk under the infamous slogan, "Arbeit Macht Frei" (work sets you free) at the entrance to find just over 7,000 emaciated prisoners.

It later emerged that Nazi authorities had halted gassing and started demolishing the gas chambers in late 1944 with the advance of the Red Army. In a bid to erase the evidence of what they did in Auschwitz, the Nazis forced nearly 60,000 prisoners deeper into Germany on death marches days before the arrival of Soviet forces, leaving behind the most exhausted ones. 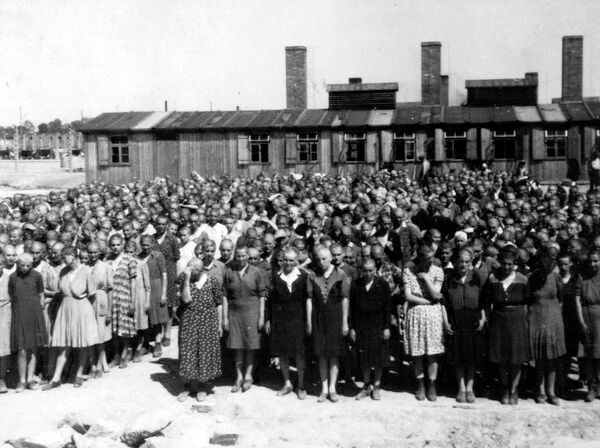 In their memoirs, Soviet soldiers wrote that some survivors walked toward them; others ran away in fear. They had to convince many Auschwitz prisoners that the Nazis had gone and they were now safe.

“Half-dead skeletons would sometimes crawl from under the bunks and swear that they are not Jewish,” recalled one soldier. “No one could believe in their possible liberation”.

Another wrote: “The kids kept silent and just showed the numbers tattooed on their arms. They had no tears. I saw them try to wipe their eyes, but they were dry”.

Marshal Konev didn’t visit Auschwitz at the time, although he was nearby. “It’s not that I did not want to see the death camp with my own eyes – I consciously did not allow myself to do this,” he recalled. “I was afraid that what I would see there would make me cruel, that I would start to seek revenge.”

According to a declassified information bulletin by the 1st Ukrainian Front’s political administration, the Red Army command quickly realised the scale of the tragedy and collected evidence of Nazi atrocities in the camp, including remaining Nazi documents and witness testimony.

Soviet troops also found about 1.2 million men’s and women’s garments, over 43,000 pairs of footwear, an untold number of toothbrushes and shaving brushes, and 7 tonnes of human hair in the camp.

Present day. That evidence of Nazi crimes is now on display at the Auschwitz-Birkenau museum as a reminder of what hatred, racism, and moral collapse can cause.

The Second World War wasn’t a fight between world powers for lines and dots on a map, like its prequel, like most wars humanity had waged ever since it came into existence. It was a fight between the idea of death and the idea of life. Life won. It always does.