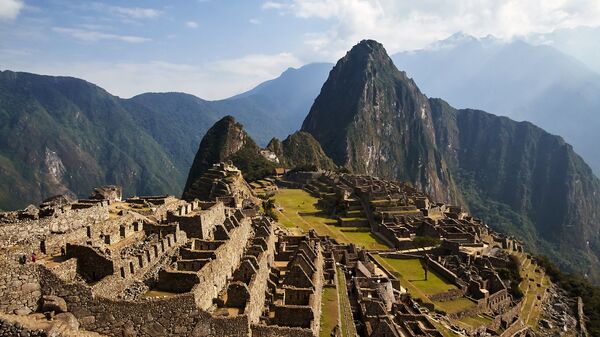 The new security measures at the centuries-old Inca citadel are going to be employed after the iconic Temple of the Sun located there ended up the worse for the wear following a visit by a group of tourists.

Peruvian authorities are now moving to bolster security measures at the famous Incan citadel and archaeological wonder Machu Picchu in order to help prevent possible damage to the site by unruly visitors.

Jose Basante, head of the archaeological park, explained that some 18 cameras will be installed at strategic locations within the citadel and at access points in the surrounding mountains, adding that drones were also being employed to improve surveillance in the area.

"We are going to strengthen security at Machu Picchu by installing high-tech cameras", he said. "This will allow us to better control visitors and avoid any action or infraction to the regulations, also any type of risk".

This development comes after a group of six tourists were accused of damaging the citadel, with five of them subsequently being deported to Bolivia and prohibited from returning to Peru for 15 years.

The sixth tourist, 28-year-old Nahuel Gomez from Argentina, was fined $360, and must pay $1,500 to the cultural ministry as he admitted to damaging the Temple of the Sun located at the site.

Nahuel also received a suspended sentence of three years and four months, though he is apparently free to leave the country when his fines are paid.

"The damaged caused is significant. The integrity of Machu Picchu has been broken", Bastante lamented.

Earlier, the authorities also said that human faeces had been found at the site following the tourists’ visit.

Built in the 15th century during the reign of the Inca emperor Pachacuti, Machu Picchu was declared a Peruvian Historic Sanctuary in 1981 and a UNESCO World Heritage Site in 1983.

Despite it being one of the most visited tourist attractions in Latin America, only a limited number of visitors is admitted to Machu Picchu per day to reduce the degradation of the site.