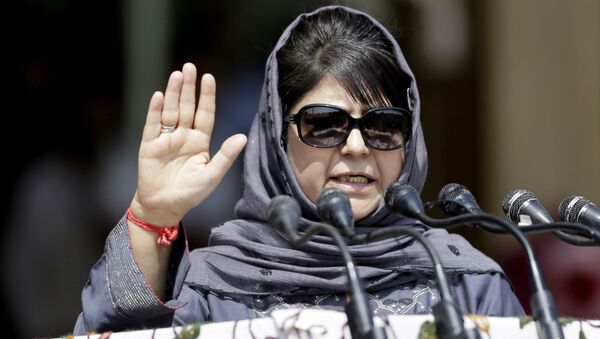 © AP Photo / Mukhtar Khan
Subscribe
New Delhi (Sputnik): Around 500 political leaders were detained as a precautionary measure in Jammu and Kashmir after the government revoked its special status. Anticipating protests and provocations at the hands of state politicians, many of them have been kept in their houses or guest houses.

Former Jammu and Kashmir state chief Mehbooba Mufti – who has been under house arrest since last August, and forbidden from meeting anyone or going anywhere as part of the political curbs imposed in the newly formed union territory administered by the Government of India – has claimed harassment by security forces.

Mufti, who is also the chief of the Peoples Democratic Party, through Twitter has alleged that she was harassed by the Special Security Groups (SSG), which report to the Ministry of Home Affairs.

She also mentioned being monitored by the SSG, Crime Investigation Department (CID) and Intelligence Bureau (IB).

After being manhandled & illegally detained in Kashmir, I am now being harassed by SSG which reports to MHA. My right to freedom cant be curtailed under guise of ‘security & safety’. Given that a top cop was caught red handed with militants, Im certainly safer without them

​With no Internet connection in the Valley, Mufti’s Twitter account is handled by her daughter Iltija Mufti who took over Mufti’s account on the 46th day of her detention. She often criticises the government for its actions in Kashmir.

In December, the government had ordered the release of five politicians from detention.

Indian parliament revoked the special status of Jammu and Kashmir on 5 August and divided it into two federally-administered territories. Mobile phones services were blocked in the region, and are being restored in phases. Presently, there are no prepaid mobile or internet services but postpaid calls, broadband internet and SMS services are now available.