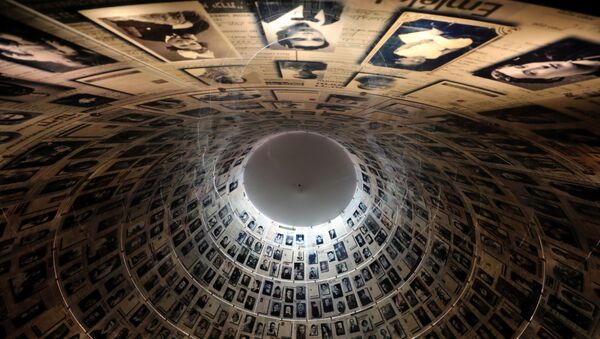 Subscribe
The Fifth World Holocaust Forum begins on Thursday with dozens of world leaders, including Russian President Vladimir Putin, coming to the city of Jerusalem to commemorate the 75th anniversary of the liberation of the Auschwitz concentration and extermination camp.

The forum will begin at about 1:10 p.m. (local time) with an by address Israeli President Reuven Rivlin, while the memorial ceremony will start at 3:10 p.m. (local time) with Holocaust survivors Rose Moskowitz and Colette Avital lighting a memorial torch followed by the heads of delegations laying wreaths at the monument to the Warsaw Ghetto uprising at the World Holocaust Remembrance Centre.

Prior to the forum, the world leaders wrote letters expressing their deep and ardent commitment to keep the memory of the Holocaust alive as well as fight antisemitism. Their statements have been gathered in a book that will be presented to the forum's participants.

"The spirits of evil are emerging in a new guise, presenting their anti-Semitic, racist, authoritarian thinking as an answer for the future, a new solution to the problems of our age. And I wish I could say that we Germans have learnt from history once and for all. But I cannot say that when hatred is spreading," Steinmeier said, as quoted by AP.

US Vice President Michael Pence shook hands with Russia’s President Vladimir Putin on Thursday as both are attending the World Holocaust Forum in Jerusalem to commemorate the 75th anniversary of the liberation of the Auschwitz death camp by the Red Army.

Pence spoke at the ceremony at Yad Vashem and on his way back from the podium briefly greeted Putin, who rose from his seat for a handshake.

Both leaders were seated in the front row, with Israeli Prime Minister Benjamin Netanyahu and his wife Sara between them.

13:22 GMT 23.01.2020
Putin Says Nazi Crimes Against Jews Were Some of Most Shameful, Terrifying Episodes in Global History

"The crimes committed by the Nazis, their deliberate, planned, as they called it - 'the final solution to the Jewish question', dear colleagues, is one of the most tragic and shameful pages of the modern world history," Putin said at the World Holocaust Forum in Israel.

"And we all bear the responsibility to make sure that the terrible tragedies of the past war are never repeated, and that the future generations remember the horror of the Holocaust and the death camps, the siege of Leningrad," the Russian president stressed.

Vladimir Putin gets personal and shares his family's story pic.twitter.com/a80pu6tljz

Memorial for Victims of Siege of Leningrad is Inaugurated in Jerusalem - Video
11:06 GMT 23.01.2020
Opening Ceremony of Commemorative Monument, the 'Candle of Memory'

The opening ceremony of the monument “Candle of memory” pic.twitter.com/RDoIVInDQu

Russian delegation has an extraordinary reception - standing ovation from the audience pic.twitter.com/zznMhsKhsG

Vladimir Putin Arrives in Tel Aviv Ahead of 5th World Holocaust Forum - Video
000000
Popular comments
The Holohoax festival in occupied Palestine is a mandatory trip for any western head of state, bound by their commitment to the Zionazi cause. Russian and other heads of state of the free non-anglo Zionist world however, are not. Putin is unofficially there in other business but he wouldn't for the world miss the opportunity to hand the Polish c*ck-s*cking regime of prostitutes their @sses to them.

(real)mikhas....
23 January 2020, 11:51 GMT11
000000
Belief in the victors propaganda is plummeting; 21% in Poland, 17% in Hungary.... fewer people are being suckered into this scam. Unsurprisingly, those dependent upon compensation for fantasy corpses are in a blind panic. Strange: On the one hand we have 100% media promoting the holocaust whilst being completely out of step with their readers. Interesting times ahead.