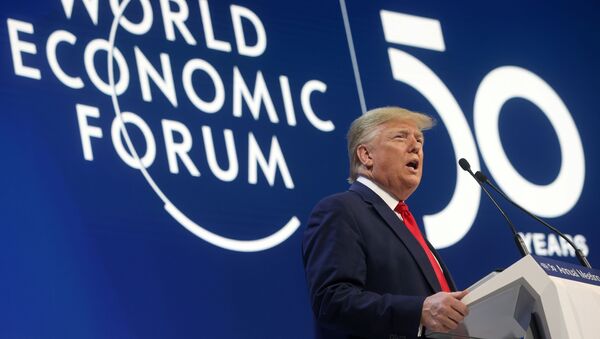 17-year-old Greta Thunberg, a climate activist from Sweden, was among those watching the US president speaking on stage at the Davos forum, where climate change was one of the main topics, along with sustainability.

While addressing the public at the World Economic Forum in Switzerland's Davos, US President Donald Trump supposedly dismissed climate activists as "the perennial prophets of doom", though he did not explicitly mention "climate change" in his speech, the New York Post reported on Tuesday.

"We must reject the perennial prophets of doom and their predictions of the apocalypse. They are the heirs of yesterday's foolish fortune-tellers", Trump said.

However, President Trump said he was a "big believer in the environment" and vowed his country would join the "One Trillion Trees Initiative" to reduce carbon emissions into the atmosphere.

“We're committed to conserving the majesty of God's creation and the natural beauty of our world", the president said.

Trump's speech was also witnessed by climate activist Greta Thunberg, who became popular after initiating strikes outside the Swedish parliament on Fridays. The teenager, however, did not seem happy with the US president's decision to join the 'Trees' initiative, commenting that "planting trees is good, of course", but adding that it was not enough to "replace mitigation".

President Trump has mocked Thunberg in a series of tweets recently, saying in one of the them that the teenager should work on her "anger-management issues", apparently referring to her passionate speeches on stage where she accused world leaders of "stealing her childhood" for their treatment of climate change.