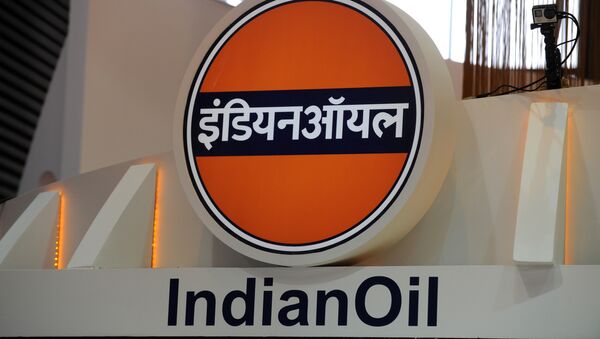 New Delhi (Sputnik): Ghana started commercial oil production in December 2010 and it has been actively involved in creating a petrochemical hub to diversify petroleum industry opportunities for both economic development and job creation.

As part of the Indian government's endeavours to extend its outreach towards Africa, the Indian Oil Corporation (IOC), a government-owned public sector undertaking, signed a pact with the National Petroleum Authority of Ghana on Wednesday.

"In a step that will further strengthen relations between India and Ghana, Indian Oil has signed a MoU with the National Petroleum Authority (NPA) of Ghana for providing its assistance and technical expertise in the implementation of Ghana's National LPG Promotion Policy," India's Ministry of External Affairs (MEA) said in a statement.

"The purpose of this MoU is to strengthen cooperation between the two parties in the field of petroleum, in particular, LPG, in which the IOC would support the NPA in the successful implementation of the Cylinder Recirculation Model (CRM) of LPG," the statement further said.

The Indian Oil Corporation (IOC), as per the agreement, has to offer support to Ghana's National Petroleum Authority so that it can have Health, Saftey, Security and Environmental (HSSE) standards, licensing, permits and legal frameworks, and the economics for LPG bottling plants, as well as pricing structures, and a communication strategy.

India and Ghana have enjoyed warm bilateral relations for more than six decades. Ghana was included as one of the nine West African countries under the Indian government's "Team9 Initiative" in 2004.

New Delhi has been supporting Accra's development by offering assistance in setting up projects through frequent Lines of Credit (LoCs) and grants from time-to-time. For example, LoCs for various developmental projects in Ghana were at an estimated $480 million until Fiscal 2016-17, according to the MEA.

India's engagement with Africa intensified between 2014 and 2018. The Indian government believes that expanding its footprint in Africa will enable it to keep track of China's rising political, economic and military clout on that continent.

In October last year, Mohammed Amin Adams, Ghana's Deputy Minister for Energy, in charge of the petroleum sector, had revealed that his country nurtured hopes of working with Chinese investors to build a much-envisaged petrochemical hub to help maximise the benefits of the petroleum industry across the country.

Situated in Atuabo town, over 300 km from the capital city of Accra, Ghana's only gas processing plant was developed by the Chinese energy firm Sinopec and financed by the China Development Bank.

The gas plant and the limited volume of gas pipelines have become a critical foundation for the West African nation's petrochemical hub's infrastructure.