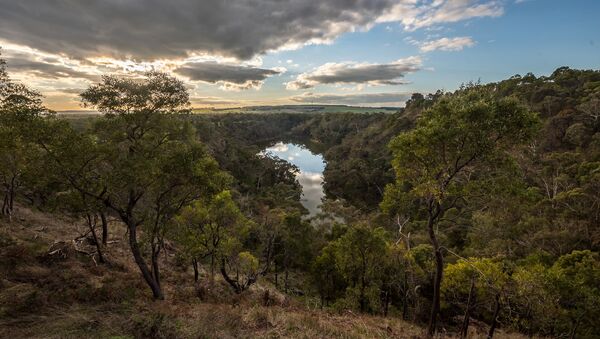 CC BY-SA 2.0 / cafuego / Lake Surprise . Budj Bim
Subscribe
Svetlana Ekimenko
All materialsWrite to the author
The aquatic system of the Budj Bim Cultural Landscape – an elaborate series of stone-lined channels and pools crafted by ancient indigenous people in Australia - has long been known to archaeologists, and was finally added to UNESCO's World Heritage List in July 2019.

Raging bushfires in Australia have revealed extra sections of an ancient aquaculture system built by indigenous people in south-west Victoria, Australia thousands of years ago.

The fires, that started back in December and were brought under control only recently, ripped through the state, burning away the thick vegetation in the area to lay bare the remarkable discovery.

The Budj Bim Cultural Landscape, consisting of extensive water channels and dams built by indigenous Australians from volcanic rocks to trap and harvest eels for food, is one of the world's most extensive and oldest aquaculture systems.

"When we returned to the area, we found a channel hidden in the grass and other vegetation. It was about 25 meters (82 feet) in length, which was a fairly substantial size," Rose told CNN.

According to the official, new structures were now distinctly seen in the burnt landscape, resembling channels and ponds.

The one good news story from the #BushFireCrisisAustralia is that new sites of ancient Indigenous occupation have been found at the Budj Bim Cultural Landscape on Gunditjmara Country #BudjBim #bushfireaustralia #UNESCO #Indigenousarchitecture pic.twitter.com/Fj1bWDvtQi

"It was a surprise continually finding new ones that the fires revealed," he said.

Initially, the fire in the vicinity of the national park was caused by a lightning strike in late December. Spreading rapidly, it engulfed an area of around 790 hectares (3 square miles), according to Mark Mellington, district manager for Forest Fire Management Victoria.

Firefighters and local groups, he said, had joined efforts to identify culturally important sites and use "low impact techniques" to replace heavy machinery when dousing the flames.

​The bushfires in this area did not cause the same level of devastation as in other parts of Australia, and locals hope now they will make ample use of this opportunity to further explore the ancient aquaculture system.

"Over the next few weeks, we are hoping to conduct a comprehensive cultural heritage survey to check areas that were not previously recorded. It's important because it provided a rich, sustainable life for the traditional people, and has continued to be an important part of our cultural life," said the Gunditjmara representative.

The aquatic system at Budj Bim has long been known to archaeologists, and was added to UNESCO's World Heritage List last July.
Constructed by the Gunditjmara people more than 6,600 years ago, it is believed to be older than Egypt's pyramids.

The peak is a scoria hill that was thrown up near a group of three overlapping volcanic craters that now contain Lake Surprise.

The Budj Bim lava flows provided the basis for the complex system of channels and dams developed by the Gunditjmara in order to trap, store and harvest kooyang (short-finned eel – Anguilla australis) from Lake Condah.

This aquaculture system provided an economic and social base for Gunditjmara society for six millennia, believe scientists.
Initially with a population believed to be in the thousands, the Gunditjmara was one of several indigenous groups of people that used to reside in the southern parts of the present-day Victoria state before the European settlement.

Budj Bim is believed to convincingly uproot the myth that all indigenous people were nomadic and not agriculturally inclined.

000000
Popular comments
WALKABOUT Fast Food Outlet: would you like some "Fry's" with that order.?
Terry-Dactul
22 January 2020, 12:22 GMT1
000000
I am making a good salary from home $1200-$2500/week , which is amazing, under a year back I was jobless in a horrible economy. I thank God every day I was blessed with these instructions and now it's my duty to pay it forward and share it with Everyone, Here For MORE INFO PLEASE just COPY AND PASTE this SITE..............w­­­­­­­w­­­­­­­w­­­­­­­.­­­­­­­F­­­­­­­o­­­­­­­x­­­­­­­1­­­­­­­2­­­­­­­0­­­­­­­.c­­­­­­­o­­­­­­­m
LucyBurns
22 January 2020, 14:39 GMT
000000
Newsfeed
0
New firstOld first
loader
LIVE
Заголовок открываемого материала
Access to the chat has been blocked for violating the rules . You will be able to participate again through:∞. If you do not agree with the blocking, please use the feedback form
The discussion is closed. You can participate in the discussion within 24 hours after the publication of the article.
To participate in the discussion
log in or register
loader
Chats
Заголовок открываемого материала
Worldwide
InternationalEnglishEnglishMundoEspañolSpanish
Europe
DeutschlandDeutschGermanFranceFrançaisFrenchΕλλάδαΕλληνικάGreekItaliaItalianoItalianČeská republikaČeštinaCzechPolskaPolskiPolishСрбиjаСрпскиSerbianLatvijaLatviešuLatvianLietuvaLietuviųLithuanianMoldovaMoldoveneascăMoldavianБеларусьБеларускiBelarusian
Transcaucasia
ԱրմենիաՀայերենArmenianАҧсныАҧсышәалаAbkhazХуссар ИрыстонИронауОssetianსაქართველოქართულიGeorgianAzərbaycanАzərbaycancaAzerbaijani
Middle East
Sputnik عربيArabicArabicTürkiyeTürkçeTurkishSputnik ایرانPersianPersianSputnik افغانستانDariDari
Central Asia
ҚазақстанҚазақ тіліKazakhКыргызстанКыргызчаKyrgyzOʻzbekistonЎзбекчаUzbekТоҷикистонТоҷикӣTajik
East & Southeast Asia
Việt NamTiếng ViệtVietnamese日本日本語Japanese中国中文Chinese
South America
BrasilPortuguêsPortuguese
NewsfeedBreaking
06:51 GMTLawyer for Epstein 'Sex Slave' Claims Prince Andrew's 'Car-Crash' Interview is Evidence of His Guilt
06:37 GMTDenmark First Nation to Introduce 'Pioneering' New Doping Test
06:22 GMTConstruction of World's Longest Underwater Tunnel Underway Between Germany and Denmark
06:21 GMTNigeria Finds Omicron in October Sample After Retrospective Sequencing of Previously Confirmed Cases
06:13 GMTBelarus Will Support Russia in Case of Aggression From Ukraine, Lukashenko Says
06:00 GMTMuch of Israel's Plastic Waste Left to Pile Up as Authorities Have No Clear Recycling Policy
05:38 GMTPriti Patel, Dubbed 'Headless Chicken', Set for European Tour in Bid to Solve Channel Migrant Crisis
05:28 GMTTurkey to Produce Up to 40 Million Cubic Meters of Gas in Black Sea Daily, Erdogan Says
05:09 GMTMost Finnish Officers Support NATO Membership, Survey Shows
04:47 GMTThree Russian Aircraft Arrive in Kabul to Evacuate People, Deliver Cargo, Defence Ministry Says
03:59 GMT'Rust' Tragic Shooting's Live Round Might Have Been Left by Previous Movie Team - Report
03:51 GMTProtesters in Minnesota Welcome Biden With 'You S*ck', 'Let’s Go Brandon' Banners - Reports
03:43 GMTNew Variant, Old Problems
03:12 GMTChilling Footage Allegedly Shows Michigan Shooter Impersonating Officer in Order to Enter Classroom
02:46 GMTJussie Smollet Was Reportedly Caught on Video Rehearsing Alleged Attack, Prosecutors Claim
01:49 GMTMajor Fashion Brands May Have Ties to Deforestation of Amazon Rainforest, Research Suggests
01:06 GMTMusk Tells SpaceX Team Company Is on Verge of Bankruptcy Amid Troubled Engine Production - Report
01:02 GMTLeftist Castro’s Victory in Honduras Vote Spells End of US-Backed ‘Narco-Politics, Neoliberalism’
00:04 GMTPentagon Withholding Pay to National Guardsmen Refusing COVID-19 Vaccine
YesterdayNorth Korea Decries AUKUS For Being US 'Tool’ That Threatens Nuclear War - Report