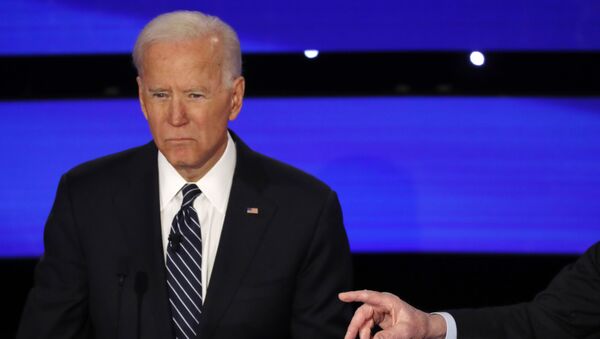 Democratic presidential frontrunner Joe Biden seemingly snapped after a campaign event in Mason City, Iowa, when one of the reporters asked him about his criticism of Bernie Sanders.

The former vice president was leaving the event when CBS reporter Ed O’Keefe peppered him with questions about his ongoing criticism of the Vermont senator in an exchange caught on video.

“Yesterday, yesterday, you said you accepted Bernie’s apology. Now you’re attacking him. Why are you doing that? Why wasn’t his apology enough, Mr. Vice President? Why attack Sanders?” O’Keefe repeated, until Biden stopped, turned around and got in O’Keefe’s face, eyes bulging.

WATCH: After a campaign event in Mason City, Iowa, @joebiden reacts to @edokeefe's question about his ongoing feud with @berniesanders: "Calm down, it's okay." https://t.co/a2hmMbnjnf pic.twitter.com/ymOMWRR2zP

Biden than calmed down and gave the reporter a gentle left-hand fist bump before turning and continuing on his way, adding, “He didn’t mention anything about whether or not I was telling the truth about Social Security.”

The question arrived as Biden and Sanders exchanged vocal criticism over Social Security and other matters. The former vice president also noted that Sanders had apologized to him after one of his supporters wrote that Biden has a “corruption” problem.

“Sometimes campaign staff gets a little ahead of the candidate,” Biden said, later adding, “I accept his apology, and I hope we can argue on the facts.”

According to recent polls, there is a tight race between four main Democratic contenders: Joe Biden, Bernie Sanders, Pete Buttigieg and Elizabeth Warren.

Dr. Thomas Whalen, associate professor of Social Sciences with Boston University, believes that everything is going to depend on "what is going on in the world".

"I mean, this Iranian situation seems to be controlled right now but what if something happens to blow that up? How will the voters respond? That probably benefits, somebody like Joe Biden who has foreign policy experience who’s been chairman of the Foreign Relations Committee, Vice President. At the same time the impeachment trial, that is going to dominate political discussion. [...] that is going to allow people like Biden and Buttigieg in the entire Iowa and New Hampshire to go campaigning. They should be able to draw sizeable crowds. You are not going to be hearing anything about Elizabeth Warren or Bernie Sanders. Personal retail politics – that’s what wins you in places like Iowa and New Hampshire in the early going of the nomination fight. That cannot be underestimated, how critical that is", the professor says, adding that in the current conjuncture, Biden is likely to win the Democratic Party nomination.