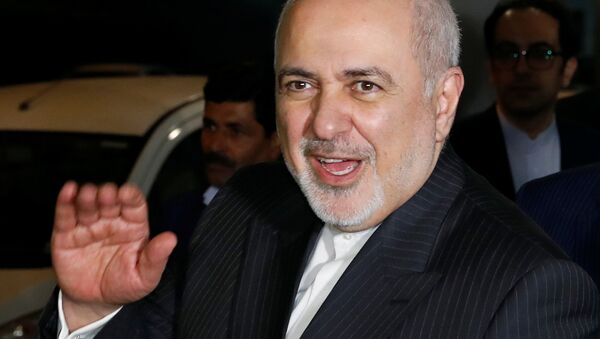 The three European signatories to the Iran nuclear deal triggered a dispute resolution mechanism last week, a move tantamount to an accusation that Iran is violating its terms, which could eventually lead to the return of UN sanctions.

Iranian Foreign Minister Mohammad Javad Zarif has quipped that the EU’s efforts to force Iran back into the nuclear deal have backfired as Donald Trump floated the idea of imposing new tariffs on the bloc.

“Sorry to say I told you so: when E3 sold out remnants of #JCPOA to avoid Trump tariffs last week, I warned that it would only whet his appetite,” Zarif tweeted on Wednesday, referring to the three European signatories of the Joint Comprehensive Plan of Action – Britain, France and Germany.

“After selling their integrity and losing any moral/legal ground, ANOTHER tariff threat. EU would do better to exert its sovereignty.”

Sorry to say I told you so:

When E3 sold out remnants of #JCPOA to avoid Trump tariffs last week, I warned that it would only whet his appetite.

After selling their integrity and losing any moral/legal ground, ANOTHER tariff threat.

EU would do better to exert its sovereignty. pic.twitter.com/tgGwExMhdU

Zarif’s tweet came in response to Donald Trump renewing his threat to impose painful auto tariffs on the European Union while his administration is struggling to negotiate a new trade deal with the bloc.

Last week, the three European countries formally triggered the dispute resolution mechanism enshrined in the agreement in a bid to force Iran back into compliance with its nuclear commitments. That process could eventually lead to the reinstatement of United Nations sanctions that were lifted in 2015. Iran called the move a “strategic mistake.”

The Washington Post reported days earlier, citing unnamed European officials, that the Trump administration had threatened to impose a 25 percent tariff on the imports of EU-made cars and car parts. It wasn’t clear whether that threat affected the decision, given that reports about the possible use of the mechanism by the Europeans surfaced as long ago as July 2019. Trump did not mention the Iran deal when he brought up the tariffs either.

Iran effectively abandoned the deal earlier this month in response to the assassination of its top general in Iraq by the United States, following a year and a half of Trump’s campaign of maximum pressure that re-imposed crippling US sanctions on the Islamic Republic.

Tehran has repeatedly called on the European signatories to shield it from the sanctions so as to save the collapsing deal. The European have condemned US actions and pledged to abide by the agreement, but did not press ahead with any tangible steps. The establishment of a special trade mechanism, long delayed due to internal disagreements, proved insufficient to avoid US pressure.