As the First Case is Reported in US, What is Wuhan Coronavirus and How Dangerous is It? 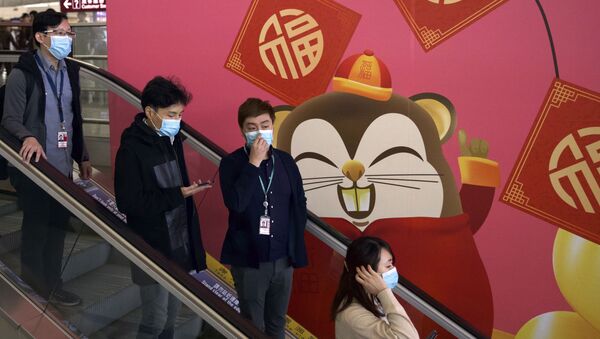 The first case of coronavirus has been reported in the United States.The virus, which was first spotted in China, has spread throughout Asia and threatens to go global. But what is it and how concerned should we be?

The Wuhan coronavirus, which has left nine people dead in China and 473 more in hospital, has spread to the United States, with the Centers for Disease Control and Prevention registering a case in Seattle, Washington.

US President Donald Trump, asked about the disease, said: "We do have a plan and we think it is going to be handled very well. We've already handled it very well. The CDC is terrific. Very professional.”

passengers screened for coronavirus symptoms on a domestic flight out of Wuhan pic.twitter.com/ytUbVzpYRZ

​The 2019-nCoV virus was first spotted in the Chinese city of Wuhan last month. The symptoms include coughing, difficulty breathing and a fever and it can develop into a potentially fatal pneumonia.

It has spread from Hubei province to Beijing, Shanghai, Macau, Hong Kong and has been detected in patients in Japan, South Korea, Thailand and now the United States. Taiwan also reported its first case on Tuesday, 21 January.

​Efforts are being made to quarantine travellers who may have been to Wuhan - a metropolis in central China which has a population of around 19 million.

On Wednesday, 22 January, the UK government said flights from Wuhan to London would be isolated in a corner of Heathrow airport’s Terminal 4, where a health team would screen patients before they were allowed to enter the country.

But Professor Calum Semple, an expert in outbreak medicine at Alder Hey Children's Hospital, told the BBC it took five days for symptoms to manifest themselves and he questioned how the Department of Health team could be sure the passengers did not have the virus.

This weekend sees the start of the Lunar New Year celebrations around the world, a time when traditionally millions of Chinese people travel home or to see their family abroad.

The Year of The Rat officially begins on Saturday, 25 January, but festivities last until 4 February.

China’s health vice-minister Li Bin told reporters: "The rise in the mobility of the public has objectively increased the risk of the epidemic spreading and the difficulty of prevention and control.”

#China🇨🇳 has reported to WHO 139 new cases of the novel #coronavirus (2019-nCoV) in #Wuhan, #Beijing and #Shenzhen over the past two days.
This is the result of increased searching and testing for 2019-nCoV among people sick with respiratory illness. pic.twitter.com/qAuaFzYmXH

​The World Health Organization (WHO) is holding an emergency meeting, chaired by director general Dr Tedros Adhanom Gebreyesus amid fears the virus - which may have crossed over to humans from animals - could turn into a pandemic.

The virus is believed to spread "respiratory transmission" - coughing or sneezing, in laymen’s terms - but the director-general of China's Centre for Disease Control and Prevention, Gao Fu, said it was adapting and mutating.

The Chinese authorities have isolated 2,197 people who were in contact with infected people while another 765 have been released after being observed for several weeks.

There is currently no vaccine for 2019-nCoV and 15 nurses in China have contracted it through contact with patients.

In 2002 another virus, Severe Acute Respiratory Syndrome (SARS), emerged from China and killed 800 people around the world.

​In the case of SARS, the virus crossed from animals to humans because people in China were eating infected civet cats.

The WHO and the Chinese authorities are believed to be exploring the possibility that the source of the coronavirus may be a market in Wuhan where wildlife is traded illegally.

The WHO said an animal source was most likely to be the primary source of this outbreak.

North Korea, a close ally of China, has banned all foreign tourists from entering the country.

Screening is being stepped up at airports in the United States, Australia, Japan and Singapore.